For some odd reason I find myself making list most of the time, lists of pretty much anything, categorizing and prioritizing, music is no exception. So as of now I am going to start my end of the year music wrap. Maybe Ill do one with movies and live shows as well.

Back in the day I used to cohost a radio show called "All Things Rock," on 98.1 WQAQ, and we always used to have theme shows or special programming, every year the one episode we always did that I looked forward to was the end of the year wrap up. We would discuss what happened the past 12 months in music and it was always the best show we did and the most fun I had on air, all three of us had different opinions and different records we really rocked out.

So to begin my list, here are my "honorable mentions of 2006", albums that were really good but not good enough to crack my top 10.

For those with a ADD or cant stand to have me ramble on, here is the list without explanations.
In no particular order:

Sparta-Threes
We all know the story by now, its members of At the Drive-In that didnt go to Mars Volta. That is old news and in case you lived under a rock for the past six years, thats the update. This is the bands third disc and probably their most fluid and concreate effort to date. Mixing the soul of U2 and the sound of early Radiohead (back when they played with fuzzy guitars and bass), Threes is a record of looking foward, whereas the last two efforts from the San Antonio quartet have been of rememberance and looking at how things could have been. The band nearly broke up before they entered the studio, orginal guitar player Paul Hinjaor, left to go join, unsurprisingly, The Mars Volta. However, the band pushed foward, got a new man on axe and delivered their most mature and surprising effort to date.
KEY TRACKS: Atlas, Untreatable Disease.

The Killers-Sam's Town.
Ok, its not funny anymore, stop making fun of this record--that goes to you as well Brandon Flowers! After a few spins, Sam's Town plays like an Americana Opera. Maybe not a very good one, but one that is enjoyable after it grows on you. Arena rock meets synth-pop on the Las Vegas group’s sophomore effort. What Sam’s Town seems to lack, that made The Killers debut Hot Fuss such an entertaining experience is the cleaver lyrical satire, for example, from Hot Fuss the single “All These Thing’s I’ve Done,” lines such as, “These changes ain't changing me. The gold-hearted boy I used to be,” and “I got soul but I am not a Solider.” However, what makes The Killer’s sophomore effort stand out from their debut is the how the band has grown as musicians. Singer Brandon Flowers projects his voice to ranges his audience has not heard and we attend to the rhythm section provided by drummer Ronnie Vannucci and bassist Mark Stoermer has gotten much stronger. Sam’s Town seems to be concentrating more on a musical journey, where Hot Fuss was a fun, rambunctious record that brought snyth-pop back to the mainstream. It is defiantly worth a listen, the record features guest appearances by members of Louis XIV and is produced by Flood (U2, Brian Eno).
KEY TRACKS: When You Were Young, Sam's Town

Bruce Springsteen and The Seager Sessions Band-We Shall Overcome.
I know its wierd that this record is not in my top 10, but its an album of covers. A record that took me a little while to even respect, but once I got into it I realzied how important this is for our state of the union. New Jersey God (There is only one), Springsteen has this funny way of making America remember its roots, after 9/11 The Rising was released an album dedicated to the idea of the American Dream and what the world is like with something missing from the New York skyline. He does this again with We Shall Overcome, a record of bluegrass and country tracks orginially done by Pete Seager. Now this record, more important than ever living in a post-Katrina society and trying to rebuild on the music an lifestyle N'Awlins gave to the United States.
Key Tracks:Pay Me My Money Down, Old Dan Tucker

Bob Dylan-Modern Times.
There is nothing modern about this release, its a stripped down rockabilly rock and roll record with production not up to par, or something else Dylan would say about the current state of recorded music. But it is a worthwhile album to check out, Dylan fans will go crazy over it, where as the casual Dylan listener like myself will find themselves just enjoying the music, or just smug assholes will play it at Starbucks and think they are cool with there double decafee late and mocha sprinkles. Something like that, its an album that affirms Bob's time has come and gone, he has written everything he ever needed to and not that he should stop making music, but just keep having fun.
Key Tracks: Rollin' and Tumblin', The Levees Gonna Break

Joseph Arthur-Nuclear Daydream.
I just absolutly love this record from start to finish. My take on it is, if John Lennon and George Harrison were alive today and wanted to do something really cool and unique with a fresh new band..say The Shins..Nuclear Daydream would be the end result. On Arthurs sophmore disc he spans the creative energy that some indie rockers wish they had or are just too smug to be energetic. His influences are obvious, they are Beatles, the solo works of Lennon and Harrison and the works of his peers today. It is a fantastic album that is totally worthwhile to pick up and really fun to listen to.
Key Tracks: Slide Away, Too Much to Hide.

Comming Soon: 10 best albums of 2006 and League of Thier Own

Email ThisBlogThis!Share to TwitterShare to FacebookShare to Pinterest
Labels: Bruce Springsteen, Music List, Radiohead, The Beatles, The Killers, The Roots, u2

In Mid September I worked on a PSA (Public Service Announcement) for HIV/AID's Awareness. The spots were directed by Liev Schrieber (Manchurian Candidate, Everything Is Illuminated and soon to be starring in CSI) and Rosie Perez (White Men Cant Jump, Do The Right Thing) and were shot by Matty Libatique (Inside Man, Requiem for a Dream). You will recognize many faces from this all-star campaign. Much fun to have worked on and getting to know the talent.

The spots will be airing nationally on cable TV starting Dec. 1. A Documentary was also produced, I will let you know when that airs.

Here is the link. Check it out, let me know what you think:
http://www.kismetfilms.com/psa2006/
Posted by Salvatore Bono at 5:14 PM

Email ThisBlogThis!Share to TwitterShare to FacebookShare to Pinterest
Labels: The National

Online and In Print

The Dynamic Duo of Bill Reese and Myself joined again to review (Bill) and Photograph (Me) another concert. In late October we shot Sparta/SoundTeam/As Tall As Lions at New York's Irving Plaza.

Here is the article and our work together...and we made the front cover again (First time was when we shot this past summers AmsterJam).

Bill gives the show justice, As Tall as Lions another fantastic band to come out of Long Island stole the show. While Sound Team was unlistenable, Sparta opening with high energy and faded away, one of the weaker performances I have seen of that band, yet, still pretty good.
Here are some more pics of the night: 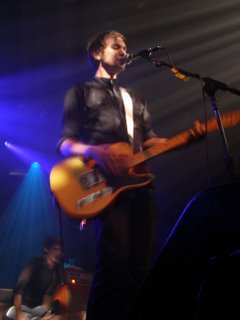 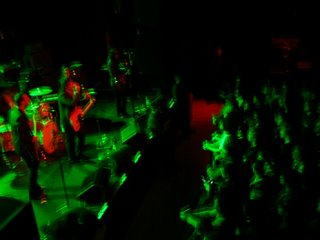 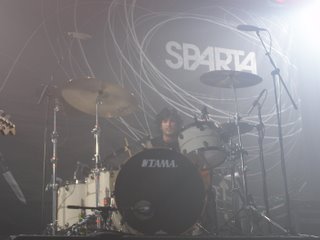 So why am I doing this..hmm..basically what this blog is for is to post album reviews, movies and things that are going on with me. I think its the easiest way to keep everyone posted on what I'm into and whats going on. So, why should you care?....A lot of people have been asking me for music and movie updates, whats good, what sucks and what you need to hear, see and discover and thats cool. Well, the best way to display that is through this and reach as many people as I can, and if you decide to click on the little link in my profile and check out what I gotta say....Thanks...if not, piss off :). I will try and update this as often as I can. I think I can include photo's to this as well, so as soon as I learn how to navigate and use this better, the content will beef up.

Also, for those of you that know me best, my spelling and grammer will be terrable as always. Thank God for the person that created spellcheck.

As for now check out:

Brand New's new album "The Devil and God are Raging Inside Me." Fellow Long Island natives of mine have grown up and gotten out of the "emo" genre that they helped launch to the mainstream. Singer Jesse Lacey has written some of the darkest and deepest lyrics this past year. From the track "Millstone," Lacey expresses:

"I used to pray a God was listening.I used to make my parents proud.I was the glue that kept my friends together,Now they don't talk and we don't go out.I used to know the name of every person I kissed.Now I made this bed and I can't fall asleep in it."

Just a taste of what the rest of the record is like, it sounds like the slower songs from Deja Entandu mixed with a spiritual edge and division not herd since U2's "War." Lacey is a divided soul that cant make up his mind about anything, hence probably why the record took almost three years to make.

Unfortunaly the creative work of this band is on tour with the uncreative Dashboard Confessional this holiday season. They make a tript MSG on Dec. 8, its worth it to see Brand New (who put on one hell of a live show), and their new material. Then get up and leave after their set is done so you dont have to suffer through the 13 and 16 year old girls screaming at Chris Carrabba (Emo"s Nick Lachey).

So thats what this blog will be about. Until next time.
Posted by Salvatore Bono at 9:02 AM