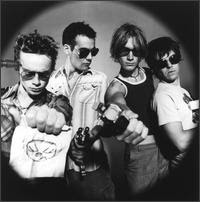 Just right before I went off to cover Lollapalooza, I posted that Arckid had split up and Spacehog were getting back together. Since then rumors were swirling that Spacehog singer Royston Langdon was to be fronting Velvet Revolver and Spacehog were no more already. This could be further from the truth. The band known for their biggest hit, "In the Meantime," are looking to reclaim popularity and begin a new chapter in the band's career. Playing their first show in LA, a few weeks ago, opening for fellow Brit-rockers The Subways, Spacehog are looking to claim their place back in the hearts and minds of fans worldwide. I remember seeing the band back in 1999 opening for REM at Jones Beach, it was a thrill seeing four really cool guys up on stage and myself a 15 year old belting out all the song lyrics. It was also a little awkward singing the band's hit "At Least I Got Laid," with my mother sitting next to me, but that's the power of rock and roll--right? It was also great to see the band in their new formation of Arckid last summer. They were everything I loved about Spacehog, the energy, the passion and above all else the fun seeing a band having fun on stage. I had the opportunity to speak with Spacehog member Jonny Cragg and asked a few questions about the reunion, music industry and what will happen to those unreleased Arckid recordings. Here is what he had to say...

What caused the Spacehog reunion?
Jonny Cragg: the realisation that we weren't that bad and a thirst for cash.

Where you inspired by other acts like The Verve, The Police, Portishead.. to get the band back together?
JC: It's hard to ignore what's going on with the other bands but no. I think we had to make our own decision in our own time

Are there any regrets for never officially releasing Arckid Material?
JC: Yes, but like it's forbear Spacehog, we procrastinated too much.

Will Arckid tracks find their way into Spacehog?
JC: maybe if Chris will let us

As a band of gentlemen from the UK, has living in the US inspired your recent work?
JC: I am now an American (still like pie, peas and a pint though)

What are your thoughts on the music industry today?
JC: Last days of the Roman empire

Posted by Salvatore Bono at 4:22 PM