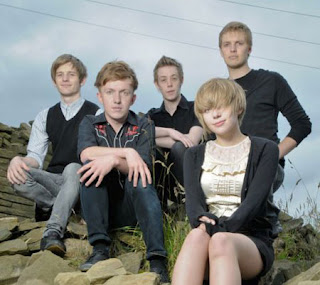 Looks can be deceiving. At first glance the English band Rolo Tomassi looks like ever other indie outfit out there these days. Yet, when they start playing, stand back or be prepared for a battle, it will get ugly. The band who is noted to be "Progressive Hardcore," take the style of bands like Dillinger Escape Plan, the DIY ethos of Minor Threat and mix it with the aggressive nature of Throats and you have a formula that could sum up Rolo Tomassi but not exactly. Unlike most hardcore bands, the band is fronted by a very powerful and intense woman, Eva Spence, who delivers up a raucous intonation that proves she can shove her way into the old boys club and not think twice. The band, who take their name from the fictional character in the critical cult film, LA Confidential have been taking the UK underground by storm and even gaining attention to worldwide famous producer Diplo, who produced the band's sophomore release, 2010's Cosmetology. In an exclusive interview take a look as we talked to Tomassi synth man and backing singer James Spence on the bands sound, textures and pushing their way in the scene.

You hail from Sheffield, England that has very thick music roots, do you feel you need to uphold any legacy from Sheffield or does that not even matter?

The name of the band comes from the phony character in LA Confidential, how did you decide this would be the title of you band?

I wish there was more to this story but its totally a superficial thing. I watched the movie and thought it sounded cool. Thats all there is to it.

Is LA Confidential a favorite film of yours? It is pretty amazing even after all these years.

Absolutely. I watched it again recently maybe for the 15th+ time and it still is a great movie.

Word is you are already working on a follow up to 2010’s Cosmology. How is this coming along?

We're certainly thinking about it but haven't actually started on it as a group. We've written a few new tracks that will be released on record as part of our subs club that have already been recorded. I've begun writing some music that will possibly make it to album three as I'm sure the others have but there are no entirely new tracks as yet.

Has making each record, especially with different people behind the controls, been a learning experience for you? What do you pick up at the end recording?

Yeah totally. We've been fortunate in that we've never had a bad recording experience with anyone we've worked with and its been more of a case of people bringing out the best of us in different ways. At the end of any recording process I always feel as though I could be better at playing my instrument which is positive as its drives me on to improve before the next time we go to the studio.

Diplo produced Cosmology, how was it like working with him. How did he end up producing your music when he generally sticks to electronic based material?

It was certainly different. We've never really worked with a 'producer' as such but I think we've the group of songs we had for this record it was the right decision. When it came to us working with him, he mentioned our name in an interview and we approached him about doing a remix. It escalated from there.

Would you work with him again?

If our calendars could match up again, totally. He's a busy guy though.

Some of the British press has called you, Throats, Gallows, and Flats the future of British punk. Do you feel like this is a true statement? Or do you stand out beyond those other bands?

Its a really bold statement to make but equally something that doesn't really concern me. We haven't ever set out to be 'the future of music' or whatever.

Years ago a woman would never front a hardcore band like yours, now time have changed for the better, is Eva a pioneer in showing this change?

Again, pioneer is maybe too strong a word to use. Me and Eva have played in bands since we were 11 and 12 years old and when we started this band it was a simple decision to do it together. Never was it our intention to do it because no-one else had a female vocalist or that the hardcore was crying out for a female pioneer.

The style of the band is not just punk and hardcore, but also has elements of jazz and “mathcore,” who are some of your influences in your style and sound?

That jazz based sound is brought in by our guitarist Joe. I know he's influenced by Pat Metheny when it comes to that and a lot of the math stuff comes from bands like Meshuggah and Dillinger Escape Plan.

Your music is greeted with such raw emotion and anger, is it therapeutic for you to play a style
like this to release some of those sentiments?

I think the therapy can often be more in the writing of the music but then getting to play live and do our thing is also a lot of fun.

With your live shows and creating your music that has high emotions, playing the songs night in and night out, is it tiring to take yourselves back to that place of pain and anger?

Not at all. I think if the songs ever did have that effect, we'd take them out of the set. The emotions were included at our own discretion and I think, particularly with regards to lyrics, if anything was too difficult to sing/scream about, it wouldn't be included.