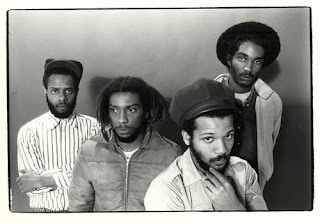 Starting off as a Jazz ensemble then being introduced to punk in 1977, the DC legends in Bad Brains were revolutionaries ahead of their time. Taking their name from a Ramones song, "Bad Brain," this DC band took the punk sound coming from New York and mixed it with the punk look coming from London and made it all their own. Being a pioneering band not just from DC, they were also the first all black punk band and one of the first all black rock bands. As the decade came to a close, Bad Brains took their bombastic style and cranked it up a notch and helped usher in a genre known as Hardcore. Influencing DC natives like Minor Threat, Henry Rollins, Iron Cross and Black Flag (pre- Rollins). As word spread about the band in the underground, they would begin to fuse their hardcore style and mix it with reggae and jazz and creating a sound and movement all their own. Bands like Beastie Boys, Living Colour, Rage Against the Machine, Red Hot Chili Peppers, BLK JKS and so on all owe a great debt to Bad Brains and their influence, not just on music but as people. What Bad Brains did was never conform to a certain type of anything, they pioneered movements and tried new things and still were ahead of their game. Now on their fifth decade as a band, Bad Brains are going just as strong today as they always gave. I had the opportunity to speak with bassist Darryl Jenifer as we discussed the band's history, politics and influence. Take a look at my interview with Darryl below.
Aside from playing shows, what has Bad Brains been up to these days? Will we get another record soon?
The Brains are ever living, ever loving, ever faithful and ever sure, we will be this until the wheels fall off.

Though you were a hardcore band with Reggae roots, you took your name from a Ramones song. What did Punk rock mean to you when starting off and how did it spawn off into hardcore for you?

Punk Rock was the next level of creativity in the fact that you didn't have to be virtuosic to hold a place in a band, Hardcore is just the son of Punk Rock, we never were Hardcore.

Though there have been some bumps in the road, when you started Bad Brains did you expect that you would have gone on this long?

Yes I knew that Bad Brains was a life calling, I could feel it the music and movements of the group.

As one of the first all African-American hard rock bands that helped pave the way for acts like Living Colour, Fishbone, TV on the Radio and South Africa’s BLK JKS. What do you feel about the fruits of your labor?

This is the fruits of JAH labor Bad Brains is just a vehicle a vessel.

Also, with so few all African-American rock acts, why do you think there is a lack of this in the genre?

Did you consider yourself influential as the scene was in its infancy?

If and when one is truly influential they can never know this before hand. Or after acclaim.

As a band from DC, you uprooted yourselves to New York after a band in your native city. Looking back, do you feel like it was a stab in the back from where you came from that they did that to you?

Bad Brains is of the world outer national of the cosmic.

Do you identify and consider yourself a New York band now? Or will you always be a DC act?

We are not a act, we originate from Washington DC, we are of the world.

One major New York band that took to your admiration was Beastie Boys and Adam Yauch produced your last record, Build a Nation. What was it like working with him?

Adam has been a fan and friend of the band for years, working together on Build A Nation was fun and games fa sho.

Adam has been battling cancer for a year, what message do you have to your friend?

Adam is not the only musician to have produced for you, your 1983 record Rock for Light was produced by Ric Ocasek of the Cars. What was it like working with him? Was it a bit odd since your styles of music are so vastly different?

Although our styles were different our musical integrity was the same, Ric is like a big brother to me and uncle to Bad Brains.

Music will always be a living force from it's beginnings in the jungles of Africa to the computer futuristic age of today and beyond, a undeniable force.

When I spoke to Henry Rollins, Ian MacKaye and Bouncing Souls, I asked them the same question. Do you ever feel jealous or angry, if not both, about how fast it is for someone to get recognized today, unlike when you started out starving for what you were doing?

Every mans burden is the heaviest, reward is not in money and fame.

Social and Political issues have always been at the forefront of Bad Brains. Do you think that your song’s meaning and power are still needed today?

There will always be a love in our music, love is the answer. Fire will burn Babylon.

On the same topic, how would you describe the world we live in today?

The world we live in today is JAH world JAH plan. We all must give thanks and praise and wait on JAH.