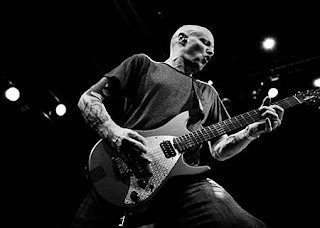 Santana had his pop meets classic rock compilation with Supernatural, Tony Iommi had his metal meets well, more metal compilation on Iommi. Now Descendants and ALL guitarist Stephen Egerton has his punk on punk compilation with Seven Degrees of Stephen Egerton. The record has the guitarist enlist some of his friends Tim McIlrath from Rise Against, Milo Aukerman of Descendents, Chris DeMakes from Less Than Jake, Mike Herrera of MxPx, Scott Reynolds and Chad Price of All, Joey Cape from Lagwagon and others for a straight up punk explosion. Egerton, who has been making music for 30 years now, is for the first time doing things on his own. We had a opportunity to speak to the guiarist about his latest record, collaborations and of course the possibility of ALL and The Descendants playing again in the near future. Take a look at our interview with Stephen below.
How did your solo record “The Seven Degrees of Stephen Egerton” come about and evolve?
I moved to Tulsa, Oklahoma in 2003, and opened my studio Armstrong Recording in 2004. During all this time I was writing music, and eventually I'd amassed so many songs that I felt like I should do something with them. I went ahead and recorded the music to a bunch of them. Unfortunately I'm not much of a lyricist, and an even worse singer, so my wife suggested I ask some friends to contribute the singing and lyrics. I have many very talented friends who were willing to give me a hand.
How do you think it holds up against your material from All and Descendents?

I like it as well or better than a good part of the music I've been involved with in the past. I wrote a lot of the vocal melodies on the record, which is something I didn't used to do a lot of, so this record represents growth for me, and for that I'm proud.

Do you feel it was liberating after all these years to finally make a solo record and make music on your own?

I've always thought it would be fun to take a crack at doing all the instruments myself. I love playing drums and bass as much as guitar. I really haven't wanted to do a solo record per se, but it was a matter of convenience in this case.. and very challenging.

Did you feel nervous putting your music out there by yourself without a band?

Not too much. I've played drums and bass as long as guitar, so I figured I could pull it off well enough to make a good record. I think the idea of having one guy doing the music and a bunch of different singers was kind of a fun departure from the way records are usually made.

You have so many great guests on “Seven Degrees,” how did you choose who to contribute vocals and lyrics to your work? Was it difficult finding the right people for the project to help bring the songs to life?

It took a while to work out. I'd already recorded the music before I knew who was going to be able or willing to help me. I spent a couple of months figuring out who of my friends would sound good on which song. Fortunately I have many talented friends, so I had a lot to choose from!

Will there be another solo record in the future?

I'm sure I'll do this again. Probably very soon. I had a blast making it.

Is there still anyone you would love to work with after all these years?

There are many people I'd love to do a song with. Dave Grohl, Henry Rollins, Keith Morris, John Lydon, Paul McCartney, Ryan Adams, Elvis Costello, Mikey Erg, Fiona Apple, Chris Cornell, Ginger Wildheart, Parry Gripp... the list could go on forever, and there are so many possibilities I hope to explore.

I think there's always great music being made. Sometimes it's so far underground that most people never hear it, and sometimes it's right in front of us, but it's always there. When I encounter something new that moves me, it's just the most excellent feeling. Short of family, nothing in the world compares.

Do you ever feel jealous or angry, if not both, about how fast it is for someone to get recognized today, unlike when you started out starving for what you were doing?

I take those things in stride. For my part, I've managed to live the life I always dreamed of living. I've been so ridiculously lucky. I got to tour and make records with an amazing band for many, many years, and have been involved with so many great records as a producer/engineer. It's been a charmed life, and there's a long way to go from here. Many people have made more money, but that was never the object for me. It's about being involved in music that has the power to move someone. Other than that, as long as I'm staying afloat, I'm happy.

ALL made a brief comeback last year, will the band be getting back together again?

I'm sure we'll do more shows, and maybe more recordings at some point. It's harder now, because I live so far away from everyone else, and we haven't gotten into the modern way of passing songs back and forth. We're a very organic band, and are used to hashing out songs in a practice room over many months. Still I'm hopeful that we can do more.

Along the same lines, will The Descendents ever get back together after a long hiatus?

I'm always moving forward. I've got a lot of music to do this year, and on into the future. I've got some instrumental songs I did by myself, and my instrumental band Slorder will likely do more this year too. The hard drives are filling up fast. Lots of great bands to record as well.

Posted by Salvatore Bono at 7:52 AM