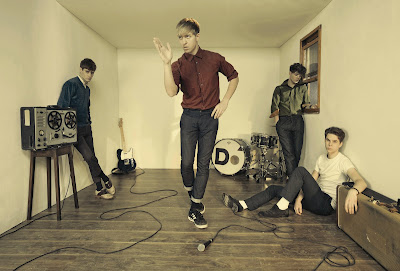 One of the most talked about and praised bands of the year has been Brooklyn via Florida band The Drums. The Drums broke out last year releasing a slew of EPs and like most American bands, got huge overseas before they even released their debut. In fact, they got so big in the UK, most people thought they were a British band. However, they are American lads that are making extremely fun pop-surf rock and are riding a great wave of success. However, earlier this month, their success was sidelined when founding member and guitarist Adam Kessler unexpectedly and abruptly left the group just as they were about to embark on a major tour with fellow indie darlings Surfer Blood. Our interview with the band had taken place just before Adam left the band and when I tried to reach the band to follow up and see how Adam's departure has effected them, the band's publicist said they had "no comment" on Adam leaving. As the band tries to push on without Adam, they can still look back and be very proud of what they have accomplished, their debut is one of the best records of the year and has been praised all around the world. Take a look at our interview with guitarist Jacob Graham as we discussed the band's beginnings, success, recording and where they are headed.
Do you feel any vindication now that your debut is done and released?
Yeah, sort of. I think a lot of people had some preconceived notions about what they thought it would be like, and you can't blame anyone for thinking whatever because our Summertime! EP was pretty thematic, but for a band to stick to a certain subject matter all the time would get old pretty quick.

What was it like recording your debut?
It was great. We did it all ourselves; produced, mixed, artwork, everything just in our bed room. Hopefully we'll always work that way.

Jonathan [Pierce - band's singer] produced the record, why didn’t you choose to go with a name producer instead of doing it on your own?
Because we think that when you're working with some one you hardly know in a place you've never been you can't really be yourself and make something as personal as it could be. Everyone works with producers these days and no one can understand our sound as well as we can.

Being a surf band from Brooklyn was it difficult being inspired by the beach while recording and living in a borough?

Well, the Summertime! EP was actually written in Florida and we don't really consider ourselves a surf band because, you know...

Where does the name The Drums come from?
Who can say? It just came to us in a vision and we thought it sounded really classic and timeless and simple so we stuck with it, or maybe it stuck with us.

You and Jonathan had been friends for a while and in electro bands together. What made them drop the synths and pick up guitars to start The Drums?
Jonny and I had been playing synthesizers since we were about 12 years old, so you just get to the point were there's nothing very exciting about them. To us guitars seemed really strange and exotic. But it really doesn't matter what sort of instrumentation you're using if you write the best songs you can.

Recently NME magazine called you “the best British Band from America,” how do you respond to such high acclaim? Are you inspired by Brit bands? If so, who?
Well I think we're a little reluctant to take on a title like that because we are Americans and we love America and lots of American music. There are a lot of British bands we love though: The Wake, Blueboy, Two Wounded Birds, The Ruling Class etc. Sweden has really had the market cornered on amazing pop music for a while though.

The Brits have really taken you with open arms, how do you feel about that? Do you feel upset that you are still pounding the pavement back here in the US while overseas you are fully embraced?
It's just timing I suppose. We got our first record deal in England so we ended up spending a lot of time there. We just recently got a record deal in America and we'll be touring here for the first time this fall. You just have to spend time in a place for people to know you exist.

Before you even had a record deal and just a handful of EP’s, the buzz that was generated around you was tremendous. Did that apply any pressure to you to live up to expectations?
No, because from the very beginning we were just making music that we loved and that's all we'll ever do. I guess it helped that we had half the album recorded by the time everything started happening so we just had to finish it up.

Some nay-sayers wrote you guys off as a cheeky “boy band,” because of your clean cut handsome appearance and you write effective pop music. Do comments like that bother you, especially hailing from Brooklyn where credit means everything?
There's not really anything you can say to people who think things like that. We've never cared about being credible, we're too busy making music.

It seems to be a trend now that Surf pop is coming back in a big way; with bands such as yourself, Soft Pack, Male Bonding, Surfer Blood. Do you think more bands will emerge with this style? Why do you think it is making such big waves again?
I have no idea. Maybe people feel restricted by all the conveniences of the modern world. I know I sure do. I think the trend is almost over though.

What is next for The Drums?

Just non stop touring and working on the next record. That's really all we have planned. We don't have any tricks up our sleeves, we just do what we do. Keep it simple, just like our songs.

Posted by Salvatore Bono at 8:43 AM