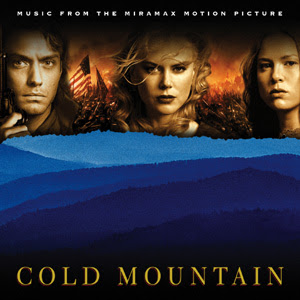 In 2003, the Civil War drama Cold Mountain stunned critics and audiences alike and the film's soundtrack helped bring back the roots music of the Appalachian. The classic sounding roots music was given a modern twist thanks to those who created the sounds that accompanied the award-winning film. The soundtrack, produced by T. Bone Burnett, featured Jack White, Alison Krauss, Cassie Franklin, and featuring songs written by Burnett, Sting, and Elvis Costello.

The soundtrack was nominated for 2 Grammys, 2 Oscars and peaked at the Billboard album charts at 51. The soundtrack even gained so much buzz that by the time the film was released on DVD, there was a special documentary about how the music was assembled and how each of the musicians got involved. Since the songs themselves are timeless, the soundtrack is one that will last for ages.
Posted by Salvatore Bono at 7:18 PM