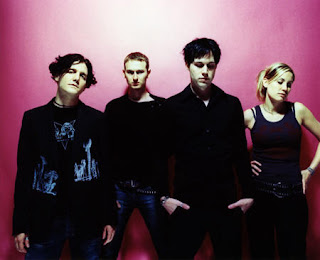 At some point during this decade, bloggers (like myself) had begun to dictate which bands were cool and what people should be listening to. Artists such as The Arcade Fire, The Shins (Pre-Garden State), The Decemberists had begun to build a reputation in the blogosphere before labels and radio took notice. One band in particular New York City's Stellastarr* was one of those bands that caught the attention of bloggers, however, Stellastarr* were much more crafty than online writers led on. Propelled by catchy hooks, clever lyrics and fantastic live shows, Stellastarr* were poised to become the next big thing from the city that never sleeps. After reaching much success with two albums, 2003's self titled debut and 2005's Harmonies for the Haunted, Stellastarr* are set to release their third album in 2009. I had the opportunity to chat with drummer Arthur Kremer about the new record, New York and touring the world. Check out my exclusive interview with Kremer...

1- How is the progress on the new record?
It's coming along slowly and un-surely. We are pretty much finished with it. It's recorded and mixed and now we're fussing about with the details such as mastering, album name and just how the hell to release it.

2- How do you think fans will react to the new album?
I hope they either really hate it or really love it.

3- You were one of the first bands to break out of the neo-New York scene this past decade. What has role has New York City played in your music? What role does music play in New York City?
New York is very much intertwined with us and the music we make. I wouldn't even know how to separate it out. I don't think stellastarr* could have been born in Tallahassee or Cleveland or any other town.

4- You were also one of the first bands to take the 80's synth sound and bring it back to the mainstream in such effective way around the world. Do you think that type of dance-rock, that you helped reusher in, makes it easier to reach a global audience than other generes?
I don't know how to answer this...Partially because we don't really use any synths and especially didn't when we first started out. We also never intended to "usher in" any particular genre of music. We just got together to make music that we wanted to make...and what came out, came out.

5- Has touring the world and having your music reach out to so many people changed you as musicians?
Absolutely. In some ways it made us better musicians, more professional and savvy. But with the good there always is the bad. I am sure we've lost a great deal of innocents and naiveté which I very much revel in. I am sure we are more jaded and perhaps more cynical as musicians and as people.

6- The sound Stellastarr* produces sounds more British than American. Has Brit-pop been a strong influence on the band?
For sure...I mean Brit pop in general is a huge influence on all music and all musicians. So many incredible musicians came out of that little place it's baffling to me. Maybe they're crappy cuisine had made them strive for something more fulfilling...well that's my theory anyway. However I will say that I think our sound is more New York than British or American. New York is a unique place that's is in my mind culturally a perfect blend of the American and European ideals. I think and hope we helped to usher in a New York sound...I guess this answer can be applicable to question 3 and 4.

7- You have placed the demo of "Warchild," up on myspace. Does this song and title reflect our current times? Will the band be getting more political / social on the new record?
We'll be getting more.

Above: Stellastarr* on Last Call with Carson Daly / Below: Video for "Sweet Troubled Soul"

Posted by Salvatore Bono at 7:56 AM