Movie of the Month - 28 Days Later 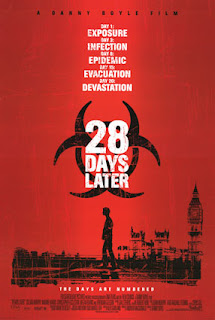 October marks two things in my mind; the return of fall and Halloween. Halloween marks the memories of dressing up and trick or treating, now as a twentysomething it is about dressing up and getting drunk (true story). But no matter what age or way you celebrate the day, it always reverts back to wanting to get the shit scared out of you and the easiest way to do so is in a film. Here is one film that will not only make your jump out of your skin, it will also make you realize every other zombie movie you ever saw was nothing compared to 28 Days Later. Directed by Danny Boyle, a personal favorite and a man who I believe is the greatest director for hire. He can do any type of film and it is still amazing, 28 Days Later was his first and only horror film to date and his most successful outing since Trainspotting. This 2002 film starring Cillian Murphy, it depicts how society has been beaten after being hit with the Rage virus turning humans into zombies. Now you maybe saying to yourself, "zombie movies are never any good." For any naysayer, this is not your typical zombie film. It is a study in the breakdown of humanity and that maybe the scariest element of the film and the looming thought of "what would I do if this was me?" Filmed in a very interesting way with Digital video camera's and forcing to block off some of London's most bustling sections for minutes at a time in the early morning, the look and feel of 28 Days Later is an achievement all its own. Spawning the successful sequel 28 Weeks Later in 2007, this film has already become an instant classic.