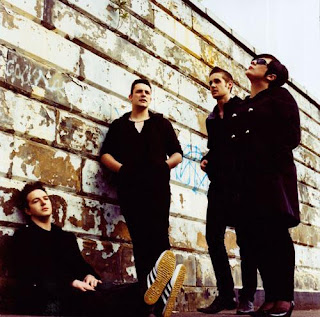 What a year 2008 has been for the Glasgow band Glasvegas. After finishing the recording to their debut record, playing sold out shows all across Europe and almost beating Metallica to the top of the UK Charts. Glasvegas are poised to become one of the biggest bands in the world. Certainly 2008 best new artist, Glasvegas know hard times, struggle and the fight to the top and are ready to stay there. They recently just wrapped a small tour of the U.S. (their first U.S. tour too, I might add) I recently had a chance to speak with the band about beginnings, New York City and the idea of a new wave of a British Invasion. Here is what they had to say in one of their very first American interviews.

1) Most bands start off in their late teens and / or early twenties. You seem to have started later than that. Doe you think your age and experience effects your songwriting?
GV:It certainly gives you more life experience and this gives you more depth when writing songs

2) Recently Glasvegas battled Metallica in the UK for the top of the charts. How does that make you feel that you were competing against legends and were very close to beating them?
GV:We made the album we wanted and went through so many highs and lows getting there and came out on the other side with an album we were happy with...charts are for record companies to be concerned about but it was interesting to read that Metallica brought their release forward

3) Your sound is very cinematic and unique. Describe your songwriting process and how each song gets to be what the audience hears.
GV: We can't ...something so creative has no process...although we do concede that first demos my differ slightly from final version

4) Why did you choose to record your album in Brooklyn?
GV: To people on the other side of the world...Brooklyn sounds otherworldly and exotic and we wanted to be inspired and Brooklyn was a magical place in a magical time

5) Did Brooklyn and New York City inspire your work?
GV: yes it did...they are such inspirational places

6) With bands such as Coldplay, The Fratellis, Bloc Party and now Glasvegas, do you think we are on the brink of the third British invasion?
GV: The days of waving at the airport are long gone.

7) Is making it in the U.S. still a big deal to a European musician?
GV: It is a different market with its own challenges but i believe every musician would like to be a success in the USA

Thanks again to Glasvegas for this interview. Their self titled debut is available now on Itunes, physical releases will be out in January.

Above Glasvegas on Jools Holland performing "Daddy's Gone," Below "Geraldine"

Posted by Salvatore Bono at 4:08 PM