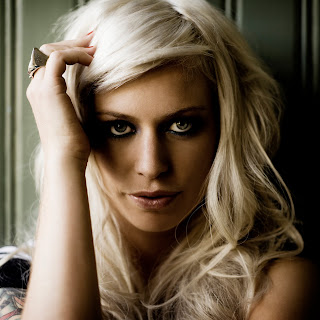 Extremely sexy, extremely talented and she is music's best kept secret. For the young and talented New Zealand native Gin Wigmore success is going to come to her in very big way, so I hope she is prepared. The singer, who is a phenom in her country is set to make big waves around the world and especially here in the United States. For her debut, Holy Smoke, she uprooted to LA and linked up with Ryan Adams backing band The Cardinals. Now, anyone who knows anything about The Cardinals is that they do not play with anyone, so Gin has the chops and talent to keep up with these legends and still stand out. Dubbed as New Zealand's Duffy, Gin has a pop style but a rock heart, the perfect hybrid for the Duffy crowd and The Cardinal's audience. I had the opportunity to speak to the beautiful singer as she opened up about recording her debut, coming to America and how the loss of her father influenced her work. Take a look at my interview with Gin below.
You are making your US debut this year, are you nervous as to how this massive country will respond to your music?
GW: Definitely a little bit nervous, but more excited that I get to have a go at music in such a massive country.
What was it like having “Holy Smoke” debut at number one in your home country?
GW: Awesome. It felt like a big high 5 from homeland, which is a rather sensational feeling. Getting the free upgrades to the nicer suites at hotels in New Zealand now is also pretty awesome!
Over the past few years we have seen a surge of female soulful singers, women like Duffy, Adele and of course Amy Winehouse. How do you differ from the pack?
Well I'm not sure I'm that soulful. I admire the more Janis Joplin road so I guess that may be my difference from the pack..But I'll always be a girl making music so I think that keeps me in the pack wether I like it or not.
What was it like working with the Cardinals on “Holy Smoke” How did you link up with them for them to play on the record?
GW: My A&R man Michael Taylor at Island Records in Australia is good buddies with Jon Graboff from the NYC days, so when the Cardinals were out in Australia with Ryan Adams last feb he basically just said would you like to be Gin's band to record her first album with. Luckily they loved the music and were keen, and 6 weeks later I met them all for the first time at Capitol Studios, where we all spent a week making Holy Smoke.
You have been a songwriting talent since you were 16, was music something you have always wanted to do?
GW: I actually started writing songs, well some kind of sad excuse for a song at about 13 years old..But no, music was always just a hobby for me, a way to get all the nasty or great things off my chest and onto paper. It was only when I got to 21 that I started looking at it as a possible career. It's funny because even though now music is my job, I have only had to add a touch of a business side to it, and it's great that the integrity of why I wrote songs at 13 is still exactly the same as today.
When I listen to your music, I hear a lot of joy and a lot of pain. Does the pain help bring about the joy?
GW: Yeah definitely. It's a grim thought, but I don't think you can experience joy unless you have had pain. How do you know what ultimate joy is unless there is some kind of measure to how bad things could go?
My theory on the pain and beauty is evident on your album sleeve. On the cover of your record, it is you laying in bed looking extremely beautiful, yet off to the side there is a photograph of what seems to be you and your father. Even though he is no longer with you, does he still inspire you?
GW: Everyday my dad inspires me. To be honest, kind and grateful mainly. And those 3 things I think can put you in pretty good stead for all aspects of this job.
What is your songwriting process like?
GW: Pretty dark and spooky preferably. I was thinking the other day how good it would be to live my life in candlelight. I think I personally could be a lot more creative if I lived in candlelight. So the main process for my writing is candlelight, solitude, no sound of the world going by other than my piano, guitar and voice.
You recorded “Holy Smoke” in LA, did the change of atmosphere have an effect on your sound and songwriting? Where you inspired by the big city?
GW: Definitely. I had to step up my game 1000% when I went to "work" each day. Walking past beautifully framed pictures of Aretha Franklin and Frank Sinatra to get to the vocal booth is inspiring in itself. And then knowing that this studio is where they made some of the most amazing music in the world, it then became my duty to be nothing short of amazing on every take (well I gave it a good go anyway!)..I am still inspired by Los Angeles, so much so that I have packed my bags and moving there in 4 days.
I ask this to every foreign artist I speak with, is it still a big deal for a foreign artist, such as yourself to make it in the US?
GW: Well it is to me, as I want to buy a big horse ranch in Montana.

Video for "Under my Skin" (Above) / Video for "Oh My" (Below)
Special thanks to Gin, Christine Colbert and everyone at Universal Music for this interview and help!
Posted by Salvatore Bono at 8:48 AM