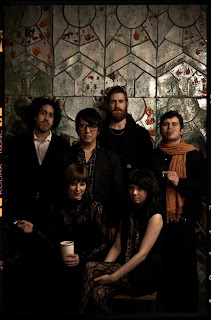 If you look at the lyrics to U2's "Bad," you will find the sound, make-up and formula to Brooklyn's Midnight Masses. The band may not agree, but the words by Bono:
"This desperation, dislocation
Separation, condemnation
Revelation, in temptation
Isolation, desolation
Let it go and so to find away"
Sum up this band to a tee. Midnight Masses are a band that has been creating a buzz in every scene possible, from touring with acts like Thursday to ..And You Will Know Us by the Trail of Dead, Midnight Masses have created a name for themselves outside their native Brooklyn. The band's music is a combination of rock and soul. As they released their debut EP last fall, Rapture Ready, I Gazed at the Body, an EP filled with dark lyrics of the afterlife and dealing with the passing of a loved one and the hope that one yearns for after, Midnight Masses are here to prove their worth and why they are one of the most important bands coming out of the popular New York borough. I had the opportunity to speak to singer and lyricist, Autry Rene Fulbright, as we discussed the band's sound and style, live shows and what goes on next. Take a look at my interview with the charismatic Fulbright below..

Your music comes from pretty dark places, where does it initially get evoked?

AF: Death is a pretty useful source for the songs. I'd say it leans towards the more abstract and metaphorical sense now than the largely literal way I wrote about death at first. It's about change and the unknown.

Your style and sound is so unique. Who are some of your biggest influences?

The lyrics to all of the songs read like poetry, how is the songwriting process done for you guys. Is it lyrics first then the beat, or vise-versa or does the magic just happen?

AF: There's no set way to write. Some lyrics I wrote a year ago made their way into songs while some music we wrote still has nothing to it. It just depends on commitment to an idea. Songs can fizzle out just like romantic relationships often do.

You just released the digital EP “Rapture Ready, I Gazed at the Body.” Is a full length due soon?


AF: I think we'll be done with a debut LP soon enough. Maybe spring? I don't know when it would come out. I'm a little anxious to get it out of the way to see if there's anything left after that. Another EP could likely come sooner-ish.

Midnight Masses hails from Brooklyn which is going through a special scene right now, so many bands and acts are coming out of that borough. How does Midnight Masses differ from every other Brooklyn band?

AF: The same way we're different from any band from any scene or city- our specific members and our individual life/musical experience. Every band is different. Hopefully we play to our individual strengths and group dynamic.

It has been said TV on the Radio has had a big impact on your musical career, what was it like working with TV member Gerard Smith?

AF: That band is full of incredibly talented, smart, funny, generous people. I had no idea what an amazing producer Gerard was. He's really passionate. He has a specific way of approaching the music and encouraging us to be a better band.

I saw you open for Thursday and Far at Bowery Ballroom and was blown out of my skin. You guys were a complete sucker-punch and I had no idea what to expect. The rest of the crowd did not either. Was it difficult playing those shows since those were more “Screamo” fans and not one’s that would take to your music?

AF: ctually the Thursday tour was the best touring reception we've had. Lots of young kids really excited about music. I definitely want to do it again. I don't think we have a scene or genre we're playing into - I'm up for anything.

What was it like being on tour with Thursday and the newly reunited Far? Did you get any writing tips from Geoff Rickley and Jonah Matranga?

AF: Geoff is inspiring with his stage presence and positivity. He's a friend so it's great playing with all those dudes. We only played with Far once and I didn't listen to them before or at the show. I remember they didn't like sharing a dressing room

Where does Midnight Masses go from here?


Video for "Preacher's Son" (Above) / Midnight Masses Daytrotter Session (Below)

Special thanks to Autry and Alexandra Comito for this interview!
Posted by Salvatore Bono at 2:14 PM