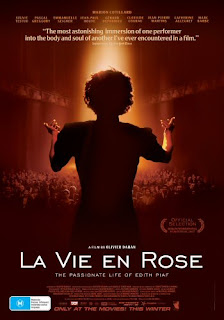 After watching this film I realized every other biopic I had seen before December 2007 was nothing compared to La Vie En Rose. This is the single greatest biopic about an person ever put on screen. The French can do more than just put people in seats, but they engross the audience in a full blow piece of art. La Vie En Rose is the story of the famous French World War II singer Edith Piaf. The film goes through her trials and tribulations as a child just trying to survive, then as a singer just trying to stay alive and not fall to addiction. Piaf was the Amy Winehouse of her day, if you will, but how her story is laid out is one of more tragedy than triumph. Piaf is portrayed by the beautiful and talented Marion Cotillard in the role that won her an Oscar at this past years Academy Awards. Cotiallard transforms herself into Piaf from not only her voice but her look as well. Take a split screen of the both of them and you will not be able to tell the difference. Of course the film is chock full of Piaf music, and I promise you will become a fan of the famous French singer. A beautiful soundtrack to a beautiful film about a tragic figure. La Vie En Rose is a must for those that have not seen witnessed it.