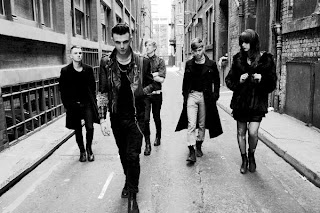 Somethings in life just go together; like Cigarettes and Alcohol, Coffee and sweets, and of course Europe and Electro music. The combination of the two have been companions for some time now, yet the next wave of Euro-electro is here and that is Manchester, England's Daggers. The band describes themselves as "Extra spectral popular song, distorted atmospherics and apocalyptic electronics." England's Independent have said "If you want to gauge Daggers' potential, you aren't just looking at the Manchester scene, or the indie scene, or anything so irrelevant. You're looking at Planet Earth." They are a small band with very big potential, their influences are laid out in their music. Think Gary Numan fronting Nine Inch Nails or Simon LaBon fronting The Sounds. It is dark as it is poppy and it certainly needs to be listened to, they will have you dancing in your seat while waving your hands in the air. Check them out HERE

Posted by Salvatore Bono at 4:57 PM