As Tall As Lions have confirmed their studio ambitions will go forth in 2009. The band will enter a Los Angeles recording studio at the beginning of January to master and finish recording their follow up to 2006's brilliant self titled sophomore disc. The latest record currently titled You Can't Take it With You, will be produced by Clap Your Hands Say Yeah producer Adam Lasus.

Seminal 90's post-hardcore band Far reunited a few weeks ago in California. Far featuring front man Jonah Matranga had sworn off rumors of a reunion last year when every band under the sun were getting back together. They played a surprise show at the Troubadour and are now doing shows in Europe. Fingers crossed for a New York appearance.
In another surprise move, The Killers were the surprise opening act to Glasvegas this weekend in England. Before the Scottish band took the stage, Brandon Flowers and Co. did a surprise acoustic set featuring some new songs as well as classics. Also in Killers news, the bands latest Day and Age was push up a day and will now be released Nov. 24.
He is a singer, a poet, filmmaker, writer, an activist now REM's Michael Stipe can add fashion designer to his resume. Stipe has designed a polo for French clothing company Lacoste for their Spring collection. The shirt can be seen below 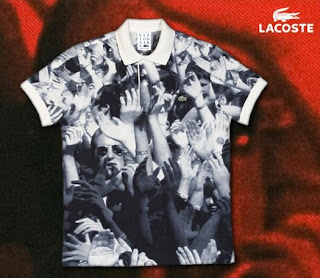 Posted by Salvatore Bono at 4:30 PM