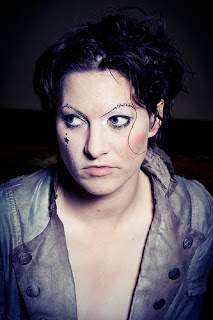 If you took the fun of Coney Island's side show and mixed it with a Broadway production you would get the music of Amanda Palmer. Palmer, who is also known as one half of the critically praised Dresden Dolls, started making waves as a solo act last year, releasing the album Who Killed Amanda Palmer? As the Dolls are on hiatus Amanda has collaborated with everyone from Ben Folds to Hold Steady's Franz Nicolay and this New Year's Eve she will be in Boston celebrating the ball dropping with the Boston Pops. If you are in the area and still lacking in plans, I highly suggest you go to that concert because, lets face it, it will be the most fun you will have in New England this time of year. I had the opportunity to speak to Amanda as we discussed everything from her solo record, to a possible Dresden Dolls reunion, to collaborations and to what it was like being on the road as a support act for Nine Inch Nails. Take a look at my interview with Amanda Palmer below..


Your style is so unique and fruitful. You combine so many different genres, who are some of your biggest influences?

Oh, everything from the music I grew up (Beach Boys and Beatles) to the things I'm listening to now (like Tegan and Sara). I've always loved messy art and minimal art - if it's touched me it's influenced me. And if it hasn't, it probably has too. I love feeling angry at art, sometimes, it makes me want to make good things.

Theater has always played a major role in your live sets and music. Why is this?

I come from theater and think in theater. I hate that theater has gone so far down the drain that many people cannot the amazing possibilities within it. I am always trying to remind people that theater is not bullshit, even though so much of it has wound up in the garbage.

What was it like working with Ben Folds for your solo record?

It was great. We really connected even though we're very different.

What do you prefer more, going solo or working with Dresden Dolls?

It's apples and oranges. I love traveling alone and unencumbered. But I love playing on stage with Brian. It's a complicated situation when your playing partner also has to be your all-day partner.

Are the Dresden Dolls done for good? Or taking a break.

I'd love to tour again sometime in the future. We're very busy with our own projects right now.

You had the opportunity with Dresden Dolls to open for Nine Inch Nails. Was it a shock to hear Trent will stop touring?

I don't buy it. He'll come back just like Cher.

What was it like being on the road with NIN?

It was very educational, Trent runs his tours with military precision.

Personally, I am a huge fan of Hold Steady and member Franz Nicolay. I know he has worked with the Dresden Dolls, have you ever considered doing solo material with him? I think you guys would make great music together!

Hell yeah! He may come join me onstage in my upcoming Brookyn show! You should come!

Sexuality and being provocative have always been a staple in your style and sound, explain why this is?

I don't know. Being sexy and also being taken seriously are very hard to balance, and I love a challenge.

Controversy has seemed to surround some of your work. The UK took ill will to your song and video “Oasis.” How did you respond to this controversy? Did Oasis the band ever mention anything?

I responded by speaking honestly about how I felt on my blog. Sometimes people are just afraid of humor, and I think this was one of those times.
I don't know if Oasis ever caught wind of it, I assume they did. I met them once in a backstage dressing room at a festival and they got my crew stoned. They were nice. One of them got angry that I didn't know who he was (I didn't, at the time).

Burning Question: Who Killed Amanda Palmer? And Why?

You did. You'll have to tell me


Special thanks to Amanda and Ken Phillips for the Interview!
Posted by Salvatore Bono at 8:30 AM