On The Road W/ Elliot Vol 3 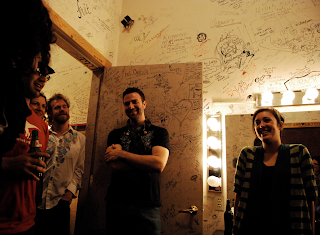 A Day in the Life - Elliot Jacobson

From September to November, I toured across the country and into Canada with the Ingrid Michaelson band on a bus with 12 bunks, a
kitchen, bathroom and two lounges. We played 47 shows, most of which were sold out in advance. We rarely took days off. We woke up in a different city almost every day. We worked hard and played hard. Here is a day in the life of the Ingrid Michaelson band.

10am - On average, this is the time when the first person would emerge from the bunks. Typically, this would be either Allie Moss, (acoustic guitar player/back up vocalist), or David Mann, (tour manager and front of house sound guy). Most days, the bus would be parked at a
hotel in the city we were playing at that day. Although we slept on
the bus, we would share one hotel room from that hotel in the morning
(called a "day room") so that we could shower, workout in the gym,
freshen up, and do laundry, if there was enough time. One by one,
everyone would eventually get up and we would take turns using the day
room (unless we had a lot of fun the night before, then some would opt
to sleep until we arrived to the venue). Most if us would hunt for
coffee and maybe food. Starbucks is always our first choice on the
road because we can always count on their consistency. We don't like
to compromise our caffeine.

1:30pm - At about this time each day, the bus would leave the Hotel
and drive to the venue. Sometimes the venue would be just across the
street. Sometimes the venue would be 30 minutes away. David would
usually take this time to try and wake up the last of us. While the
bus would be moving, the front lounge of the bus would become crowded
with Bess Rogers (electric guitar player/backup vocalist), Allie,
Lauren Glucksman (our merch girl), David, Dan Romer (keyboards, percussion, vocals etc.) Chris Kuffner (bass guitar and backup vocals), the openers, and anyone else riding with us. Lap tops were open, conversation and coffee would brew, as we looked out the bus
windows to see what little of the city we could.

2pm - The bus would pull up near the venue and our tour manager would unlock the trailer for load in. Most venues had a small crew on hand to help us move all of the grear. Merchandise came off first, then our equipment. Our young bus driver from Mississippi, Mick, would get a car to pick him up and take him to the hotel to sleep in his own room for the day. (We created a Twitter for him and posted some of his funny quotes throughout the tour at www.twitter.com/busdrivermick) Unless we weren't unable to find coffee and/or eat some breakfast before load in, we would begin setting up our gear as soon as we
finished loading it all into the venue. Once we set up, the sound crew at the venue, with David, would begin setting up all of the microphones and checking cables, etc.

3pm - More often than not, at least three of us failed to find food
before load in, so another food hunt would take place. We all prefer to eat breakfast style food when we wake up, even if it was at 3pm. So that's what we would look for first. Sometimes we would be successful in finding breakfast food, sometimes we would eat Vietnamese or Thai instead. After eating, most of us would explore the shops or sights around the venue. Because we were on the clock and on foot, this wasn't always easy. We might be able to find some cool vintage clothing stores, cute coffee shops, or some touristy stuff.

4:30pm or 5pm - Soundcheck begins. Or so we thought. Typically, we
found that soundcheck was pushed back so that David could prevent some potential sound issues before we invaded the stage. We killed time by napping, checking Email or Twitter, updating websites, calling home. Also, if we had missed our chance to shower in the morning, lucky for us, most venues on the tour had full private showers and bathrooms for artists. Some of us would shower right about now, or after soundcheck. 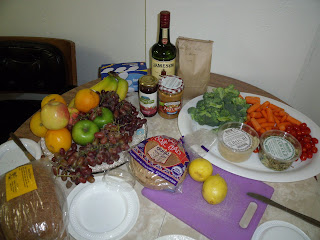 6pm - Sound check starts for realizes. Sound check would start with me hitting all the drums, then playing some fat beats so that David could get some good sounds in the house. Then, Chris would play is bass, and then we would play together, usually something like Pretty Woman by Roy Orbison or a really obnoxious (but fun!) busy funk improvisation. Then we would begin to go around and check all the instruments and voices for our monitor levels and the house levels. Dan liked to check his voice by singing (yes, with a melody) the legendary hip hop song "The Humpty Dance." Allie liked to check her voice with "Day Man" from
It's Always Sunny In Philadelphia. We played "Locked Up" from verse two, "Soldier" from the beginning of the double chorus at the end, and
"Mountain and Sea" where the band kicks in.

7:30 - The opener(s) sound checks. For the first part of the tour, it was Greg Holden. Then it was Greg Holden and Johnnny Marnell. Then it was Matthew Perryman Jones. Then it was Greg Laswell and Greg Holden. For Greg Holden's set, Allie, Bess, and Dan would join him for his song "Bar On A", so they would soundcheck this song with him. Similarly, Allie would sing back ups on Matthew's "Save You". Dan,
Chris, Bess and myself would play with Greg Laswell on "What a Day."Once we were done checking, we would find dinner. Sometimes the venue location or the whether made this difficult. In Houston, for example, it was so hot we could barely move, let alone walk around and look for anything. I was picked up by old friends and went to Ninfa's (about a 20 minuite drive from the venue). Many of the venues had catering or some sort of in house cooking (House of Blues, for example). We were usually successful in finding some great grub without looking to hard, thanks to our iPhones and Blackberrys. America is full of great food! 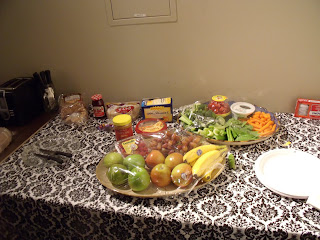 8pm - Doors opened and David would play Tom Petty's Wildflowers album in the house. He played this almost every single show. Backstage, our rider consisted of cheddar cheese, whole wheat crackers, chips and salsa, whole wheat bread, natural peanut butter, various fruit, veggie platter, hummus, whole wheat pita, various hot teas, local beer, Jameson Whiskey, White and Red Wine, and water. We would break into the alcohol a little bit before the show, and snack on the food periodically throughout the night. Some venues were a little more generous with the rider, offering us additional food. We tried to stay on the healthy side. 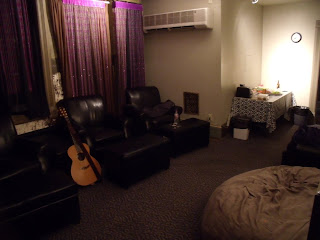 9pm - Our pre show ritual would usually begin. Gathered in the green
room, we would stand in a circle and improvise some movements and sound. It's something to be seen and heard, not described. All I can say is that it was different every time and helped us come together, laugh, and get in the right mindset for the show. I think there's a video our there with a few seconds of a "ritual" on my MySpace page.

9:15pm - We took the stage and performed. This happened 47 times on
our last tour. Our set list included mostly songs from the new album, and a few favorites from Girls and Boys. A highlight of the show was when we all gathered around Ingrid's mic and sang "You and I" from the Be Ok EP. Before the song started the song, we showcased our Man Squad and Vag Force theme songs and competed for the audience's support.(Because there were three guys and three girls in the band for this tour, we naturally broke off into two opposing teams and gave ourselves these powerful names.) We're big on audience participation, so there were always parts in the songs for singing along and clapping. For our encore, we performed a variation on the song "Maybe" making it about our love of Mexican food. I'm sure there's plenty of YouTube clips out there of this. Then we did a bluegrass version of "Far Away" complete with Dan on accordion, and Chris on mandolin.

11pm - Right after the show we came straight backstage and take 10
minutes or so to talk about the performance and relax with some more snacking, wine, and beer. Before we broke down our gear, we tried to come out and talk to fans, sign a few autographs and pose for pictures. It wasn't uncommon for fans to bring us baked goods and other edible gifts. Some fans are incredibly creative. Depending on
the city, we might have guests in town who came to see the show. This was often family, old friends or other musicians and artists. After we broke down our gear, packed it up in the road cased and loaded out of the venue, with help from the venue's crew members. We would scramble to a bar or restaurant nearby to hang with our guests. LA is always the best time, because we have the most mutual friends there. This year, we stayed there for a few days, playing two sold out nights at
the Troubadour.

2am - Bus call. This means everyone needed to be on the bus before 2am so we could pull away at 2am sharp. The bus would usually stay at the venue after the show until this time. Before bus call, the venue would help us take the rest of our rider to the bus to save for later.

2:30am - We had a fairly large plasma screen TV in the front lounge of the bus and around this time, we would use it to relax and watch LOST DVDs, movies like Team America and Airplane, Christmas movies like Elf and National Lampoon's Christmas Vacation. Every bunk had a mini fold down screen so that we could also watch from our bunks if we wanted. Some of us would begin uploading pictures on our laptops, editing tour videos, and chatting with friends on G Chat or iChat.

5:00am - Unless it was a particularly crazy night, everyone was
usually in their bunks and finally asleep as the bus drove through the night to the next city... 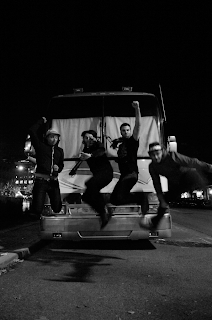 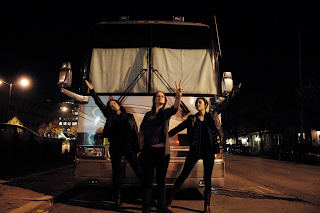 Posted by Salvatore Bono at 8:59 AM