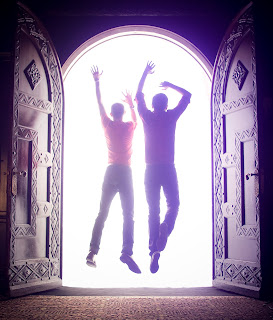 Whatever happened to the simple pop-rock and roll song? Why must all music these days must be these layered super complex studio achievements that may or may not be able to reproduce live? Whatever is going on in any scene these days, if you are looking for something simple yet sophisticated you have come to the right place. The Berkly via Brooklyn duo, Happy Ending have been making music together for 6 years kicking around New York City and New England. Now finally gaining some cash the band just self financed and recorded their debut. As Happy Ending are set to show the world what they have, I had the chance to speak to them about beginnings and what lies in their hopes and dreams. Here is my conversation with the band's key members Mike Goodenow and Carl Bishop.
As a band coming out of Brooklyn these days, how does Happy Endings not get clumped in the mold of the plethora of other acts coming out of that borough?

Where we live does not inform our music nearly as much as where we come from and what the subject matter of the song is. Our first rule was to never have a “sound”. We just wanted to tell great stories and write the best songs possible.

There are only two members in the band who work on studio material, what do you do for live shows?

It wasn’t just the two of us on the album. Our producer Jimi Zhivago, also played on the record. Especially the amazing piano work on “Through Your Eyes” and the tasteful jazzy bass part for Together Again”. For our upcoming album Debut, we are pulling from the community of local talent to make the album come alive on stage.

You write simple pop songs but with a very cleaver twist. Who are some of your influences?

Carl, who writes the lyrics, is attracted to the strong visceral emotion of John Lennon’s solo material, i.e. “Mother”, but tempers it with the wit and restraint of Steven Merritt. Michael, who writes the music, grew up worshiping Jimmy Page, The Edge and the complex and perfectly simple song structures of the Beatles.

How do you describe you style and sound to those that never heard you before?

Strongly melodic, hooky, pop rock that you could imagine on the same bill as Death Cab for Cutie, The Shins, Arcade Fire and other bands that put importance on writing great songs.

How did the band get together?

We meet in 2004. Michael was a student of Carl’s in an audio production class. Carl started awkwardly flirting with Michael and Michael unwitting took it as an invitation to write songs together. The only consummation was musical and the rest is history.


Making music is not your day jobs, how often do you get together and practice?

The band is quickly becoming our day jobs. As of this interview, we currently get together for rehearsals or meetings at least three times a week.

Since it is just the two of you, are jobs allocated, for instance does Carl write all the lyrics and does Mike write all the music? Or is it a collaborative effort?

We are both involved in all aspects of the song. It is usually sparked with a lyric that Carl writes. Then Michael finds a musical setting to support the lyrics and they develop the song together.

Where would you like the band to take you?

Albuquerque! No, seriously we would love to get to the point where it is our full time job to write and play the music we love.

The band has been kicking around for a few years, but it is just recently that you two have been emerging from the studio and doing gigs and hiring musicians. What took so long?

We were trying to write an album that was full of hits, not one and a bunch of filler. We felt the songs had reached a point where what we were writing was so good it was time to bring it to a wider audience.

When can we expect a debut?

Our album release date is scheduled for March 5th, 9PM at the Living Room 154 Ludlow Street, NYC. Attendance is mandatory.


Find your Happy Ending at:

Special thanks to Mike and Carl.
Posted by Salvatore Bono at 5:11 PM