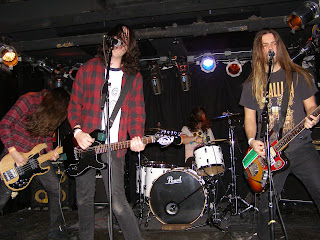 Since forming in 2004 in Brisbane, Australia, grunge rockers Violent Soho have stirred up a buzz in their native land and are now expanding the world over. With their textbook grunge sound, the Aussie rockers take you back to Seattle in the 90's, it is loud, fast and aggressive but most of all a ton of fun to listen to. Not only is the music awesome, they are the nicest guys I have ever met, seeing this band twice, their live shows are so intense I felt my ears fly off my face. Since arriving in the US this past fall, huge doors have been opened for the band, being signed to Thurston Moore's Ecstatic Peace records and Universal, opening for the likes of Built to Spill, Dinosaur Jr and being hand selected by Jack White to open for Dead Weather, the success Violent Soho has been getting in the States is not only well deserved its also unsurprising. Currently on tour with The Bronx, I had a chance to speak with the band as their self-titled debut finally arrives Stateside this week. I spoke to drummer Michael Richards about the bands success back home, current success in the US and how Violent Soho hope to fit into the legacy of Australian bands that made an impact around the world. Take a look at my interview with Michael below..

Australia has given the world some great artists. From AC/DC to The Living End to Silverchair to Wolfmother. How do Violent SoHo fit into the legacy of Australian rock?

MR: I guess you could make a few comparisons between us and other bands from Australia that have gained success outside of our own country, which really is few and far between when cmpaired with other excellent bands that have never earned a ripple of success in the United States or from outside of Australia at all. For us we see our legacy in Australia largely on a local scale, by which we mean that we can see ourselves playing a role in the history of the music movement in our own home city of Brisbane and the impact that any outside success that we might have could have on the music scene there. As far as having a legacy in Australian rock, we'd have to say that we see ourselves having the ambition to affect Australian music much more on a social or a community scale rather than a national one though this can often go hand in hand.

You came highly recommended to me by Patience from The Grates when I did an interview with her. How do you respond to such acclaim from a fellow Aussie?

MR: We're good mates with The Grates. Since having toured with them in Australia a few years ago we've been quite close and have followed each other's bands for a while now. It's great to have an appreciation of our music from another band who are from Brisbane that we are such fans of and that we respect so much.

The sound and style of Violent SoHo is very influenced by early 90’s grunge, from Nirvana to fellow countrymen like early Silverchair and The Vines. Are these bands some of your biggest influences? Who are others?

MR: We really aren't largely influenced by Silverchair or The Vines at all. However Nirvana is definitely up there with our biggest influences. Really Nirvana is the band most responsible for defining and owning that 90's guitar and drums sound, which we are deeply influenced by. Steve Albini's production on the "In Utero" album for example is a large influence on our sound. If you look at all the producers of the three Nirvana albums you'll see where our influences come from there with the other bands that those producers were working with also. Starting from Mudhoney, going through to Sonic Youth and Smashing Pumpkins and on to Jesus Lizard. Those would be some of many bands from that period that our sound and style are mostly influenced by.

It is hard not to notice your love of where you come from, your postal code is stamped on T-shirts, the web and other promotional material. What is it about the place you come from that is so special?

MR: I guess once again that's more of a community thing. We've just always seen a relevance in understanding where we came from and how that has in many ways defined us as a band. Being that we all went to high school together, we all have the sense of that same community within us. It's also just fun to shout our your postcode. We just see it as fun and as a bit of a tongue in cheek hip-hop thing.

Where does the name Violent Soho come from? Is it reflective of the neighborhood you come from? Does it have anything to do with SoHo here in New York or in London?

MR: The use of the word has no real connection to any areas of Manhattan or London.
They're two words we chose to describe us due to how they sort of juxtapose each other. Our music tends to have a real loud/quite dynamic and by using an aggressive well-defined word in turn with a passive and meaningless word it seems to compliment the same dynamic. Band names are stupid anyway.

From the moment you released your EP back in 2006, there was a buzz swirling around you guys. Did you ever feel any pressure living up to the hype?

MR: Honestly there was no hype about us back then and so there was nothing to have to live up to. If there has been any hype since then I don't think we've noticed it, but it can be hard to notice that kind of stuff when you're just driving from city to city everyday. You become quite separated from anything that's really happening outside of that.

You released your debut last year in Australia and worldwide earlier this year, what was it like making your debut?

MR: I can tell you it was loads of fun recording it. We got to stay in a studio in Wales for six weeks and just got to focus on really working on making a great record. We were working with a producer by the name of Gil Norton who's worked with bands like Pixies and Foo Fighters and so we were really glad to get the opportunity to work with such an esteemed person and are really glad with the results.

MR: Normally Luke B [Boerdam - Singer] will come to the band with a song or a riff or idea for a song and we'll work on defining our structure and dynamic as a group.

You are signed to your hero, Thurston Moore’s label Ecstatic Peace! Records, what was it like signing with his label and getting an offer from them?

MR: It was just a dream. Thurston and some others from the Ecstatic Peace Label one night came to see us play a show in New York late last year. After the show he came up to me and said: "please let me put out your record". I was just like, "yes sir!" To be so fortunate to work on a creative and professional level with such well-esteemed people as him. It's just such a great opportunity that we've been granted.

MR: So far so good. The food is horrible but the people are the best in the world.

You are recently hit the road with legendary American bands Dinosaur Jr. and Built to Spill, what has this experience been like?

MR: Our sound really comes from the era that these bands arose in. So playing with them is very ideal for us, but also just such a thrill. We're poor guys with little money, but in the end if we had all the money in the world you wouldn't be able to buy yourself into touring and playing along side such bands. So we obviously treat these shows as immensely rare and treasured opportunities for us. We can't believe we managed to get onto these long American tours with some bands that are just our idols. It's not something that you come across too often where we're from.

What was it like opening for Jack White's Dead Weather?

MR: Friggen Rad. The show had a packed audience and they were really receptive. I think we played quite well that night so all in all it was pretty fun.

Is it a big deal to break it in America being a band from overseas?

MR: Yes of course. I think that's a big deal for any band.


Special thanks to Michael and David Benge for the interview. Catch Violent Soho on tour NOW with The Bronx and pick up their self-titled debut also!
Posted by Salvatore Bono at 7:17 AM