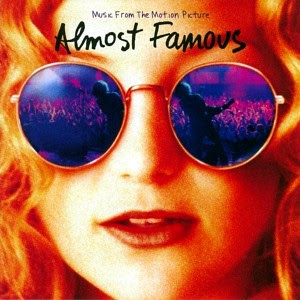 While Cameron Crowe's latest film, Aloha, tanked at the box office, and it is a shame since Jonsi of Sigur Ros did the score like he did Crowe's last film, We Bought a Zoo, which also tanked. There was a time when a Cameron Crowe film was important to film goers. His projects like Singles, Jerry Maguire, Vanilla Sky, were not just hits, they were cult classics and Oscar nominated films. Who would have thought that the kid who wrote Fast Times at Ridgemount High would go on to be a flop later in his career? Yet, above all of his films, his greatest is hands down, Almost Famous and it's soundtrack is just as much of a star as the film that is loosely based on his life.

With original music from the fictional band in the movie, Stillwater, and featuring artists like The Who, Paul Simon, Led Zeppelin, The Allman Brothers Band, Rod Stewart, and many others, this soundtrack serves as a love letter to 70's rock. Even 15 years later, the songs are as timeless now as they were then.
Posted by Salvatore Bono at 5:49 PM