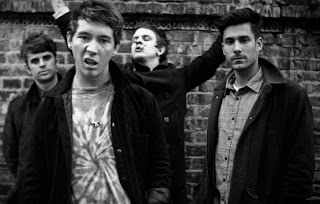 Everyone once in a while you need a band to come around and shake things up a bit, stir the system, piss people off - especially us music journalists. Band's like this make things interesting, they make things dangerous and let's face it, rock and roll needs some danger these days. I present to you a band that is no stranger to this site - BROTHER (UK). A raucous live band with an attitude that makes the Gallagher brothers seem humble. BROTHER (UK) are crafting their own genre with "Gritpop" a term they coined that takes the best of Britpop and combines it with gritty rock and roll. The band are all the buzz in England and are turning heads here in the US. As they ready their debut album, Famous First Words, which was produced by Smiths producer Stephen Street, they will be making appearances at every major festival across the pond this summer and living up the rock star life. In an exclusive interview with front man Lee Newell we discuss the band's buzz, Gritpop and recording. Take a look at our interview with Lee below:
You say you are “Gritpop,” explain to us what exactly that is?

It's whatever we want it to be really. We figured that if we were going to be labelled we'd like it to happen under our terms, so we coined the phrase gritpop. If you take it literally you could argue that it was gritty pop music. People can call us what they like, as long as they are listening. That's why we started the band after all...

There is so much hype around you back home, do you feel any pressure living up to the hype?

No not at all. When we first got together and started writing music, we knew that we wanted to hit the ground running. We wanted to be heard straight from the get go, because we believe in our music so much. The media are in desperate need of a band like us, so we embrace it. We seem to work at our best under pressure, so we will have to prove all the hype right when the album comes out!

In just a short year, the buzz has hit you real hard. How do you explain the massive following and attention so quickly?

It wasn't even a year! We put up our website on the 1st of August and by the 5th of October we signed to a major label. I can't really explain it all, nobody can. We shot a video of us playing guerrilla gigs around Slough and that seemed to get us a lot of attention. We didn't want to start the band by playing the same old boring venues straight away. It was an insight into our ethos. How we turn up, uninvited, whether we are welcome or not. It was a lot of fun and a lot of hard work. I think people can relate to that.

You hail from Slough, it isn’t exactly known for it’s music scene, was it hard being discovered and getting support there?

No not really. I think if you write great songs, really believe in it, and don't stop working for it, you will be discovered. Chris, our manager, has been a close friend for years. We sort of grew up together. He saw the potential in us from the very first demos we did. We kept ourselves locked in a rotten old barn in Slough for a year before we released any material. We would write and write and write. Josh was working nights on the railways, so he would have to finish practice then go straight to work. We had to make sure we had the best songs from the get go. Too many new bands are too eager for people to hear their music at the start. And 99.99% of the time its not very good. We didn't want to develop publicly. We like to keep our privacy.

With the plethora of great bands coming from the UK now, bands like Chapel Club, The Vaccines, Heartbreaks, Frankie and the Heartstrings and so on, how does Brother set themselves apart from the pact?

Well, I don't think any of those bands are particularly great. The Vaccines are probably the best of that bunch. They have something, and I believe that they are truthful in what they do. Chapel Club for instance I find incredibly insincere. The whole, tortured poet lead singer thing. It's not real. It's pseudo-intellectualism at its very finest and at it's most ugly. He spoke in the national paper how I was an idiot and my lyrics meant nothing. I suppose he was talking about Darling Buds Of May. On the surface the lyrics can come across as somewhat bare, but it is the ambiguity of the song that gives it it's life. It is what it is. I would rather use my imagination to conjure up a meaning to a song than be force fed faux poetry from someone that definitely used to watch Live & Kicking when he was a kid. What sets us apart? Well, where do we start? We are a real band, we don't hide behind any false pretence. We are like anybody else and we make that clear. We don't put on a media face when talking to people like yourself. Our music comes from organic origins and we had to work so hard our whole lives to get to this point.

There have been countless comparisons to Oasis with you sound, style and swagger. How do you respond to this?

Fickle comparisons are the norm, and so I'm fine with it. We don't sound like Oasis, I very rarely listen to Oasis, but I do think their first two albums were astonishing.

You worked with Stephen Street on your debut, how was it working with him? Has he taught you any new tricks?

It really is an honour to work with Stephen. He engineered The Smiths right from the start and actually produced Strangeways, which is my favourite album. He has an aura about him that makes you play really well. It's like we don't want to let him down. That's why the album has turned out so well. He doesn't necessarily have any tricks, he just gets the best takes out of you and makes fresh and interesting suggestions on arrangements.

How did you end up linking with Street? Were you fans of his work before working with him?

He actually heard us on the radio first. He got in contact with us and it felt like we were in parallel universe. Me and Sam said right from the start of the band that our dream producer would be Stephen Street. It's a dream come true.

How was the recording of your debut?

As I write this our label are here listening to it. It's all but finished. We're just going over the finer things now. They are over the moon with it. We still have a week left here so we're going to write some more and maybe go go-karting. We've been playing a lot of ping pong so we might get a championship going. Rock and roll etc.

What has been your favorite song to record so far?

It's a song called Still Here and I think it might be our next single. It's a feel good song. I get to play a weird guitar solo in it, which is always a laugh. It's an important song for us, and you will see why when it comes out.

How much fun are you having being a member of Brother?

An incredible amount. We get to play music all over the world. It's the hardest but most fun work anyone like me could hope for. We are loved and hated in equal measure which is how it should be. People have an opinion on us. Which is what we wanted.

Is making it in America a big deal for Brother? Do you think it is possible given that the musical territories are rather different?

Of course. I'm eager to play this music to everyone. America is a wonderful place, at times, and it's like a small galaxy in itself. We're very excited about going over and seeing what people think of us. I expect nothing less than utter devotion, love and praise. And a bottle in the face.
Posted by Salvatore Bono at 8:18 AM