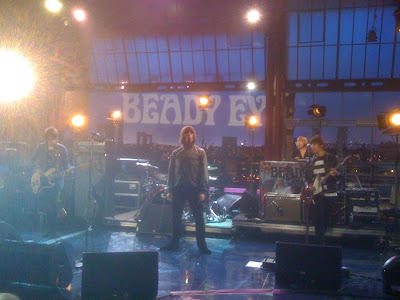 This was it, after much of publicity and a massive European club tour, Liam Gallagher and his new band Beady Eye arrived in North America and arrived back in his favorite city (outside of Manchester of course) for two highly anticipated gigs. After a taping on David Letterman earlier on June 22, the band stuck around Ed Sullivan Theater for a special Live on Letterman taping that would be the bands first official yet unofficial New York performance. For a 47 minute, loud, raucous rock and roll show, Beady Eye proved to the hardest audience they may ever play in front of, this is not Oasis, this is Beady Eye.
Walking down the aisle of Ed Sullivan and onto the stage, the six members of Beady Eye (all of Oasis sans Noel, plus Jay Darlington and Jeff Wooton) strutted their way to thunderous applause. As the band took to their instruments, Liam took to his wife, Nicole Appleton and gave her a big kiss on the lips for good luck and hit the stage. "New York City, we are Beady Eye, this is 'Four Letter Word," dropping right into the James Bond-esque lead track off the band's debut, Different Gear, Still Speeding, Liam and the boys looked like they were ready to party. With the hook of the song going "Nothing Lasts Forever," Liam would blurt out "Ain't that the truth!" a clear jab at his former days with his brother in that other band they were in. Beady Eye looked relaxed and ready all night and into each song, performing on the stage of his hero's The Beatles once did I am sure gave Liam the thrill of his life. The band look like traditional British rock stars, most of them decked out in Liam's Pretty Green clothing label, they brought the bravado that has made them so massive over the world and the fact that they can still carry it out proves their longevity and their steps toward becoming not just icons but legends. This was their introduction to America, this was their introduction to a new phase of their lives and this most of all was their way of saying, we are not going anywhere without having to actually say it. I caught up with Liam after the gig and had to ask what it is like playing New York again, he said "it is great man, nothing like it, this city blows my mind every time." Then asked what it was like going from the big stages to the intimate gigs, he replied "its still very cool for me man, its all good, its all cool." I then caught up with guitarist Gem Archer and asked what it is like for him to be going to the clubs, he said "it is exciting, it is the first time I am doing it with Liam with this tour," after all Gem linked up with Oasis as they were still headlining arena's and massive festivals, he never saw the intimate gigs with the band, until now.
This was only night one of their debut to the city that never sleeps, night two is tonight, we will be there covering it and if it is any indication as to what this preview was, it is going to be a gig talked about for ages.
Watch the full LIVE ON LETTERMAN performance below:

Posted by Salvatore Bono at 8:32 AM