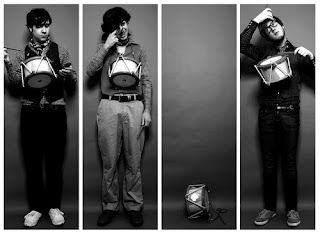 In this era of music and technology anyone can literally do anything and if it is diverse and catchy enough, it will catch on. For Ireland's Two Door Cinema Club, an unconventional electronic rock act, being diverse and catchy is what they are all about. A young act that has gained much attention through not just their music, but their enthusiastic live sets. While opening for acts like Phoenix and Delphic, Two Door Cinema Club has achieved a global buzz and show they will be around for a while. They are band that makes serious music without taking themselves seriously, which in the end may prove to be their greatest asset in surviving in the dog eat dog world of music. I had the opportunity to speak with singer and main beat maker Alex Trimble. Take a look at my interview with Alex as we discussed living up to an Irish legacy, the band's unique sound and structure and hitting the road with the France's favorite new wave rockers, Phoenix.
You hail from Ireland, the land of U2, The Pogues, Oscar winning songwriter Glen Hansard of The Swell Season and The Frames. Do you feel any pressure arriving in America being an Irish band and having to live up to those before you?
We tend not to take note of any pressure. Those acts are very different from us too. I think we fit into a different area. The Pogues fit into the very Irish influenced category, Glenn Hansard fits into a more folky category and U2 fall into the boring and predictable category.
Where does the name Two Door Cinema come from? Are you all fans of films and going to the theater?

Its named after a cinema near where we live called the Tudor Cinema. It came about after Sam mispronounced the name of the place. It seemed to stick so we changed the spelling to suit it! We're all pretty big film fans and going to the cinema is always a good activity for a day off on tour!

The sound and style of the band is really unique, who are some of your influences?

This is a really hard question for us. I always say anything and everything which sounds like a bit of a cop out answer but its genuinely true. Everything we do, see and hear has an effect on our music.

Electro driven rock has become super popular in the last 10 years, how does Two Door Cinema Club contribute to the movement and stand out on your own?

We've never consciously tried to be part of anything or avoid anything. We just want to write good music that makes us happy.

What I find great about the band is that there is no drummer! You have taken the conventional idea of a band and thrown it out the window, do you think you will ever get a live drummer?

Thanks for the compliment but we already have a live drummer...

Who programs all the beats into the Mac?

Do you believe now because you do not have a real person hammering away at the beats during your sets and studio time, technology will replace real musicians in the coming years?

Ha. No. At the minute, technology cant match up to the feel and the flare of a real musician and I doubt it ever will. Unless we get some genuine Artificial Intelligence happening in which case I think we'll end up running into a Terminator type situation.

You are hitting the road with Phoenix this year, that band blew up (finally) around the world last year. Do you feel any pressure opening for them?
No. Like I said, we don't let pressure get the better of us. We see playing with bands that we love and respect, like Phoenix, as a chance to learn and to get better ourselves.

After your tour with Phoenix you will be doing a small headlining tour in the US. Is it odd to go from openers to headliners in just a few weeks?
They're very different types of shows and we take different things away from each. It used to be strange jumping from one to the other but we're more used to it now and we know what to expect. Although I think the US will be a different thing all together!
You have been doing your fair share of remixes for acts like Phoenix and Chew Lips. Who would you like to remix your music?

I love remixes so I have a few people I'd love to have a go at our stuff!! Daft Punk, Xinobi, Chromeo, St. Pauli to name just a few!

Posted by Salvatore Bono at 8:50 AM