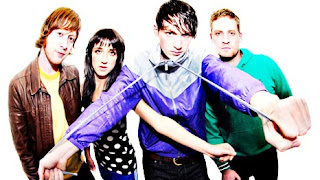 Manchester, England and its surrounding area's have given the world so much great music. From The Stone Roses, The Smiths, Happy Monday's, Joy Division, Oasis, The Buzzcocks, The Verve and countless others to the rising bands of today such as Hurts, Delphic, Starsailor and The Whip. The Whip take the psychedelic sounds of early 90's Manchester and add a strong beat to it, something you can dance to and rock out to at the same time. Since their creation in 2006, The Whip have gained fast attention through all of the UK and Europe. Aside from being in a band the band, like many these days, DJ gigs on the side and have developed a cult like following and report for their after parties. As they finish working on their new album, slated for a release later this year, they hope to and probably will explode across both sides of the Atlantic. Take a look at my interview with Whip member Bruce Carter as we discuss being from Manchester, the band's latest creation and their rise.
How is the new album shaping up? You guys have been hard at work on it, what is it going to be like?
Yeah, we've been working non stop on it. I've written and recorded about 30 songs in varying stages of completion, we're working through them at the moment trying to make the songs as good as possible. Initially I wanted to make the second record really quickly and put it out about a year ago but as the vibe is getting better given time I’m glad I was forced to wait. We’ll be going in the studio really soon to put the nail in the coffin and finish it off. I'm really proud of how it's shaping up, there is more depth to the songs and parts of it are pretty dreamy but filled with enough nightmares too. We've been playing a few songs at recent shows and they are going down well with people for a first listen, some nice moves and shapes have been thrown by the crowd.
Honestly though I can't wait to finish it and get back on the old open road that we call home for a couple of years. We enjoyed touring the first album so much and had so many random parties meeting new friends that we can't wait to go do it again.

As a band from Manchester, a city with deep music roots and history. Do you feel any pressure to ensure the quality of your music due to where you come from?
Yeah and it's great to have that pressure and even better to try and push the sound of the city forwards. All those great bands from the past made amazing music but it's best to create things new and that’s what we're really trying to do now.
We don't feel a conscious musical link to our city across all our tunes just something that happens subliminally a little.

How does The Whip stand apart from other Manchester bands and its history?
A lot of our influences are from other places, this is the same for a lot of Manchester bands past and present, everyone’s got their own vibe. We listen to a lot of electro house, a lot of French music, Italia disco, the soulwax remixes we're a bit influence when I was putting together 'trash' and we're finding our feet and getting a sound for the band on the first album.

It seems that you have become, or always have been close friends with the lads from Late of the Pier. Describe your relationship with them as friends and as colleagues.
Yeah, it's funny how music can bring bands together wherever you are from. We love to play shows with those guys, they are a good laugh. We always get a little crazy when we're out on tour together, not just the obvious party madness but just having a bit of a crazy time together. They have a bonkers side to them that we share, it's a pretty specialist kind of humor, musically we are in to their vibe too.
We had a good time touring around the states with them last year; we met them really early on a couple of years ago. We both supported 'hadouken' on a UK tour and got on since then. We’re supposed to be planning a camping trip with them but it's yet to happen.

You have gained much attention here in the States due to your remixes of everyone from The Editors to Haduken. What is it like re imaging a bands song and making it your own?
I love making remixes, it's great to take someone's song and find parts that you can loop up and take in to another world, it's really exciting. I wouldn't see the point it doing a really similar version to the original, it's good to listen to bits and then try and look at it like solving a puzzle, things start to leap out to you when you let yourself get sucked it. I'm really looking forward to doing more mixes once the 2nd album if finished.

DJing seems to be a big thing for the band when on the road or when you have downtime. Why is this?
It's just part of where we are from, fee and I have always liked to DJ so if we can find a DJ set at an after show we're well up for it. We DJ’d on our UK tour before the whole band played and it was great to set the right mood with some tunes before we whipped it up as a band.

You are playing Glastonbury last year. Describe the experience with all of those fans and new ears in front of you at the world's biggest and best festival.

We played it last year for the 4th year in a row and it was my favourite show there yet. We were on the other stage and it's the biggest crowd we have ever played to. It was strange to play in the daylight cos there was no major lights or strobes to hide behind. It was great though. I didn't go to bed for a couple days after it as it was such a buzz to play that stage.

Coming from the UK, is making it in the US still a big deal for a British musician?
It's just great to have your music recognized wherever you go but it's great to tour the states. I had such a fun time on the last trip. We toured for 5 weeks and did a big horseshoe of a journey, we saw so much, it was a real privilege to see. We played shows on hotel roofs in Miami, random TV shows in LA. Clubs and festivals all over the place and camped out in the desert near Coachella. Fun times, we are really lucky to be able to do it.

Burning Question: Man City or Man U?
Ahh, I'm a hardcore Wolverhampton wanderers fan because of my dad, I love the wolves. I watched them play a big game in a bar in New York when we were last over. I couldn't believe it when all these random wolves fans appeared.
Going back to your question, I'm not liking the way City have had a load of cash thrown their way, all of a sudden they are a different team. It’s like a microwave meal; it gets cooked too fast and tastes a bit fake.

When can the US expect to see The Whip again?
We'll be back over with the new album as soon as it's out over there, we can't wait. I love it over there, we'll be ripping it up again soon.
Posted by Salvatore Bono at 7:33 AM