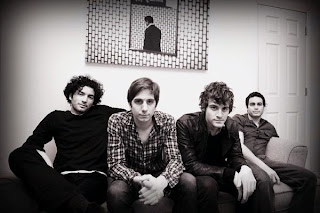 New York City has always been a melting pot for culture, art, business and creativity, there is no denying that. Yet, with the emergence of so many New York band's these days it is hard to keep track of who is who and what is what. While we sift through the internet to find new acts, many will sound very similar to one another, now here is a band from New York that does not sound like anyone in particular but themselves - The Dig. The four piece band plays sci-fi style rock and mixes it with early indie, so think early REM or Pavement meets Muse or Editors. It is very hard to explain, but something worth listening to. More impressive are the band's live shows, after seeing them open for Editors and The Antlers this winter, I was hooked. Now come and meet the band as they just released their debut, Electric Toys this past spring. I had a chance to speak with Dig bassist, Emile Mossari as we talked about recording, touring with Editors and Portugal the Man and what the band hopes to achieve.
You guys have been in a band since you were teens, how have you managed to hold it together after all these years?
We group up playing music together so I guess we don't know anything else in terms of playing with other bands. I think we're still together because we're all friends and love writing tunes and playing shows together.
How would you describe your music for someone who has never heard of you before?

That's a tough one. I'd say that were a rock and roll band, and that we're influenced by an older style of songwriting but use more modern arrangements for our tunes. We listen to all sorts of tunes and I'm sure it all comes out one way or another.

What was the recording of your debut like?
Recording Electric Toys was a blast. Our good friend Bryce Goggin produced it and we tracked and mixed it at his studio in Brooklyn called Trout Recording. He was really instrumental in putting it together, in the months leading up to tracking the record he came to many rehearsals and all our shows and became really familiar with the songs. we spent about 30 days in the studio scattered throughout the summer.

Once it was completed did you feel vindicated that after all this time, a full record of your music was finally done?
Definitely, there was a lot of time and energy put into making this record. so finishing it felt great.

It is an interesting arrangement you have as far as singers go, there is no clear cut front man in your band. Singing responsibilities go between you and David, how did this formula emerge? Does each singer write their own song or do you collaborate like Lennon and McCartney?
Well, many of the songs are written and arranged by all four of us collaboratively. Some are written individually by Erick, David, or myself. As far as the singing goes, David and I have been in bands since we were 10 years old and we always traded off singing tunes and sang songs together. So I guess it came together naturally.

You toured earlier this year with Editors, what was that experience like? Did you get a chance to hang out with them?
Touring with Editors was great. They're great dudes, all very warm people. We hung with them a little bit but they kind of did their own thing after the shows etc.

Was it nice to have fellow New Yorker’s The Antlers on tour with you while you were on the road with a massive British band?

Definitely, The Antlers were also on that tour, we hung with them a lot more , probably cause we're all from New York and know a lot of the same people and it naturally happened that way. They're an amazing band and awesome dudes. We were psyched to be playing with both those bands at such great venues.

You also toured with Portugal The Man, how did that go?

The shows have been amazing. Every show has sold out and the crowds and the bands are really great.

How diverse were the audiences from Editors to Portugal The Man?

I think the crowds are different. Its hard to tell how much of it has to with the bands we're touring with and how much is the cities we're playing in. Although, Portugal The Man has a very loyal and distinct following. I think it helps that our band, Portugal the Man and Port O'Brien all have been jamming together on stage and partying together. Its more of a community, and I think the crowds respond to that. Maybe because its a longer tour.

Is it tough being the opener for bands like these with such a massive, almost cult-like following?

I wouldn't say its tough, Its such a great experience for us to playing with all these great bands. its our responsibility to warm up the crowds and get people going. But the audiences have been really receptive and warm. Especially on the tour we're on right now.