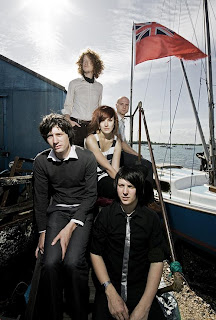 Newly elected British Prime Minister, David Cameron visited the US for the first time since winning a spot at 10 Downing Street this past spring. Cameron is the first conservative leader in the UK since 1996 and ushering in a new era of politics to the US biggest allies. Therefore it is only fitting that my interview with The Strange Death of Liberal England happen now. Though this band has no political ties to a particular party (though I am sure we can guess what their ideology is), it takes it's name from the classic book by George Dangerfield of the same name. The Strange Death of Liberal England are ushering in a new era of music in their homeland. They are a band that have been compared to Arcade Fire and Pixies, however, they have a slightly darker edge to their sound and keep the momentum going as one of the premiere indie acts in the UK. As the band has been on a slow start, forming five years ago, they are finally entering the studio to record their debut after releasing a handful of EP's through the years. Take a look at my interview with lead singer Adam Woolway as we discussed the band's name, politics, recording their long awaited debut and like last week's band, The Dig, what it was like touring with one of my favorites, Editors.
Where does the band get it’s name from?

We pinched it from a book by George Dangerfield to make us look clever and thus impress girls.

Do you consider yourself to be a political band or just thought the name sounded cool?

Both. Everything you do is political from choosing to drive your car to watching a certain TV channel. We're not gonna tell you who to vote for but we may tut slightly if you don't vote at all. And it does sound cool, right?

You started off doing instrumental songs then shifted over to more “traditional” sounding songs with lyrics, why the shift? Will you ever go back an add lyrics to your instrumental numbers?

We got quite bored writing instrumental tracks. Although that was the kind of music we listened to at the time it was not the type of music our band was due to make. Any band can press a distortion pedal and thats all we were really doing. There are certain emotions you really need words to convey.

You have been often compared to Pixies and Arcade Fire, how do you respond to such high comparisons?
The first 70 times are quite flattering as they are great bands. After that you tend to suspect the journalist hasn't really listened to your record.

Recently drummer Andrew Summerly left the band, what caused his departure? How has David Lindsay been working out? Is it odd not having one of the founding members be the backbone of the bands sound anymore?
Being a band means 5 peoples lives all have to move in the same direction and sometimes its a miracle that happens at all. When we came to recording our album we realised we had drifted apart and unfortunately embarking on such a project amplifies such cracks. Andy left the band in December last year and David has now joined. He's great and an amazing drummer so its been way easier than we could ever have hoped for. Yes, at first, it was very odd Andy not being there but Forward, March and all that...

You have gained such high recognition due to your live shows, what is it like taking the stage and playing your hearts out?
We all live regular lives, have dumb jobs and have to sit in a transit van for hours to play a gig for an amount of money that won't cover the petrol cost. If we didn't enjoy playing live so much we wouldn't play at all. We put on a good show but its all for our benefit.

What is it like being on the road with another high energy live British act – Editors?
Its great, you learn a lot and they give you champagne. Our transit van has penis envy parked next to their two sleeper buses.

How have Editors been to you guys? Are you fans of their work? Do you learn anything from watching such an experienced band while you are still a rather young band?
Editors are great. Their live show is amazing and you learn something from every band you play with, either how to do something or how not to do it.

Is a new album in the works? When can we expect it?
Soon. It’s all recorded and mixed. It was recorded in Dec 09 with David M Allen who did a lot of the 80s Cure and Depeche Mode albums. The first single is Flagships and is available on iTunes now, by the way.

I ask this question to every foreign act I speak with, is it still a big deal for a band to break big in America?
Of course. A country so similar to ours yet also such a contrast. The more people your music truly connects with the more value it has

When can we expect you across the pond, here in the States?
I couldn't say for sure but we'll only have to be asked once. Lets say...soon?
Posted by Salvatore Bono at 9:39 AM