Since the dawn of Facebook and the explosion of social networking just about six years ago, we have all managed to connect with lost friends, found new ones and showed off our own sense of narcissism at 140 characters or less in the process. However, the power of social networking in this day and age cannot be challenged and disputed, when people act on these sites, it works. Just look at how Betty White made one the biggest career comebacks in history, after a Facebook campaign was launched to get her to host SNL. Then there was a couple in England challenging Simon Cowell and his show, X-Factor and launched a campaign to have Rage Against the Machine’s “Killing in the Name of,” an 18 year old song be the most requested song in the UK to beat Cowell’s X-Factor winner from hitting the top of the Christmas charts eight years in a row. Once the people heard, it happened - Betty White hosted SNL, Rage beat Cowell.
Social networking is not just to beat out the corporate system or have some random celebrity do some random act, it is a tool most have learned that is the best free advertising one could ask for. I myself, an independent blogger use Facebook and Twitter to promote my site (“Like” and “Follow” me). As the work of an independent blogger goes noticed as will the work of an independent artist; whether it’s a filmmaker, actor, or musician. Social networking has become the new DIY, unlike in the past where bands would hustle flyers around or pass out promo CDs, as they did in punk, hardcore and hip-hop’s prime, everything is uploaded to a social network for exposure. It is cost efficient, quick and simple. Case in point, rising New York songstress Julia Ilowiecki. 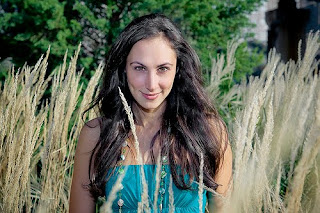 Julia began her singing career as far back as she could remember, singing the choruses of classic rock songs, Gloria Estefan and Moody Blues in the back of her father’s car. She says singing has been “ingrained” in her and “has always been apart of me.” Though as most kids would just take this as something they do for fun, Julia took it serious. A University of Miami graduate with a degree in Broadcast Journalism, Julia moved to New York City after school to pursue the career she just studied and along the way she noticed something. That something was her passion, the desire of making music. Leaving her job and focusing on her music, Julia would and will stop at nothing to chase her dream. She is a singer whose lyrics unfold as a poetic story, for Julia’s music is not overtly complex, it is simple, however, she has something to say. “I concentrate on the lyrics, it’s always lyrics first and never the production of a song,” she told me as we sat down over tea in her apartment. “I went to school to be a journalist and tell stories, once I realized I could tell stories in my music, there was no looking back.” In her lyrics a world of emotion, hope and intrigue develop and hooks the listener from start to finish.

For inspiration she drew from her own experiences but mainly she wrote and observed the fast paced New York City life around her, “New York is the only place for me. Just looking out my balcony I can get a story just from people watching.” When not writing, she would lock herself away and work non-stop at booking her own shows in the city and e-mailing venues around the country to play in. Without the aid of a manager or assistant, Julia learned more about life and the music business in just a few short years than some learn in a lifetime. “The more I did it, the more I wanted to do more and there were no regrets, I just had to keep playing” she says of the rough patches and bumps in the road she has endured. Self financing her own tour, Julia hit the road in 2009 and began a trek across the country to get her name out, how word got out about her would be through social networking. Before she would leave for tour or as she was in the process of booking gigs, she would e-mail local acts in each city and tell them to check her out. Each band and venue would use Myspace and Facebook to listen to her material. The plan worked and landed her the opening slot of local acts in LA, Boston, DC, Cleveland and Chicago. “I love to tour,” she says, “I love playing in front of a room full of people and just letting it happen.” Though like most artists find out early on, New York is not an easy place to start off, “I love playing around the country and New York is one of the scariest places to start off, but once you begin to network and make connections all new doors open.” She is now a regular at the legendary village venue The Bitter End.
As Julia lets it happen, her music has found some great company, falling into the hands of Good Morning America host Chris Cuomo. Granted Cuomo may not be Clive Davis or Quincy Jones, but he enjoyed her music after hearing it on the web, he wanted to do a segment based around her and have her play on the show. As this may have been Julia’s first appearance of national exposure, it sure would not be her last. As she is currently working on her new EP (due in the fall) and playing gigs all summer, Julia will be a busy girl and in the end, the pay off will be worth it.
Posted by Salvatore Bono at 7:26 AM