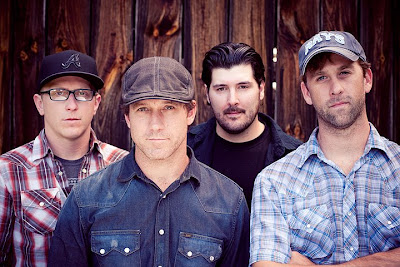 2012 has been a remarkable year for Gainsville, Florida, punk / post-hardcore out titans, Hot Water Music. Not only did they release one of the years best records, Exister, they have been selling out nearly every gig on their headlining tour, they are also hitting the road with good friends Rise Against and Gaslight Anthem this fall on what will prove to be one of the years best tours, but Hot Water Music are also hitting the festival circuit as they will be performing at Riot Fest in Chicago later this month and the subsequent Riot Fest tours leading up to the big event in the Windy City. Of course we will be on hand to catch the band in action at Riot Fest in Brooklyn next weekend, but before that, we spoke with bassist Jason Black about the bands new record, their big reunion which took place in 2007, but still feels fresh to everyone involved and the scene from which they came. Take a look at our interview with Black below:

The new album has gained such a positive response from fans and critics alike, what means more to you – the critical acclaim or the fan acclaim?

They're both great in their own respective ways, but I think the fans win this one. Without them, we wouldn't be here, so it's nice to know that ultimately made a record that the people who pay for your grocery bill enjoy.

How have you been responding to all of the positive attention?

I haven't been? One thing I personally try very hard to do is take every review, blog, message board....all of that has to be taken with a massive grain of salt, whether it's positive or negative feedback. It's may sound selfish and a bit cliche, but we make these records for ourselves as much as we do for anyone else. It's very nice to hear complements about the record and the songs, but if all we heard was negative reactions, we'd still think it's the best record of our career. You have to be sure of what you're putting out there and not let people's critiques skew that confidence one way or the other.

The shows, the record all have you back in everyone’s eyes and ears, what is it like to know that people waited around this long for a new Hot Water Music record and stuck with this band all these years?

It's awesome. It's a really good feeling to know that however many people care enough about what you do to drop back in after 8 years and check out what you're up to. Honestly, it seems like it's more people than ever, which is REALLY crazy. But still...awesome.

Exister is your first record on Rise Records, how did that relationship come about?

Pretty easily and quickly. We have a ton of mutual friends, and they were the first to get in touch about working together. We talked to a few other people, but no one came even remotely close to being as interested and invested in doing this, so we went with Rise. We're still very happy with that decision.

If the sessions for any of our other records would be like riding a bicycle, this was like floating on a raft in a pool in Jamaica with a giant rum runner. It was vastly less taxing to make this record than anything we've ever done, especially "The New What Next." Very nice turnaround from that session.

Exister is also the first Hot Water Music record to feature the bands logo. Who came up with logo and why did it take this long to showcase it on a record? What was the decision to put it on as Exister’s main photo?

Scott Sinclair--who, interestingly enough is responsible for the artwork on all of our record covers aside from "Exsiter"--came up with the logo. It was Richard Minino--who did the art for "Exsiter"--who chose to  showcase it on this record. I don't think it ever felt right before. We've never really wanted to be like "This record defines our band." This time, we were all into that idea, so it worked out very well.

Are there more records down the pipeline for Hot Water Music or is it too early to tell?

There are, for sure. We had a great time making this one, have tons of material left...and we still owe Rise another album.

With Hot Water Music back, has there ever been any talk about resurrecting The Draft or is that project totally finished?

We've talked about it a bit. We'd have to find another guitarist...it could happen. I would say it would be more likely that we'd finish up the 7-8 songs we never released before we'd start on new stuff. It seems a little wasteful for Chris, George, and myself to get together and write songs that aren't for HWM right now since that's the headspace we're in...but who knows.

The punk community is so tight, at your New York show earlier this year members of Bayside and Frank Turner came out, among others to watch you play. What is it like knowing you have all of these colleagues in your corner supporting you?

Also awesome. I have an awful time making friends or relating to people that aren't involved in the same world as I am, so it's great for me to have people I like and respect as colleagues.

Another Florida band took everyone by surprise this year when Against Me!’s Tommy Gabel came out as transgender and is now Laura Jane Grace. It seems like the punk community is coming together for him, have you spoken to her? Any words for Laura Jane?

No, I haven't spoken to her. I suppose "good luck and congrats on making yourself happy" would be my words.

One of my favorite things this band has done was the split with Bouncing Souls and your cover of “True Believers” and their cover of your song, “Wayfarer.” Will there ever be another split like that again? Or would you do the same thing with a different band, if so who?

Well, we did a more extensive split Alkaline Trio on Jade Tree before the Souls split. We covered each other's songs on that, as well.  If they were still active, Avail would be next in line as far as I'm concerned.

You will be playing the Riot Fest this summer with The Descendents, Screaming Females, The Mezingers, Gogol Bordello and The Bronx. With a line-up like this, how excited are you to play this festival?

Extremely. Playing w Descendents is always fun, and we're pretty great buds with The Bronx and The Menzingers, so it should be a blast.

Which do you prefer – the festival crowd or the crowd for your own gigs?

They're all great on some days and horrible on others. A good show can have 5000 or 50 people. The best thing to do is just have fun every time, because you're lucky anyone cares enough to show up at all.

What is next for Hot Water Music after this summer?

Good question! We're trying to get working on our schedule for next year...it's not easy with everything we all have going on, though.

Posted by Salvatore Bono at 8:36 AM