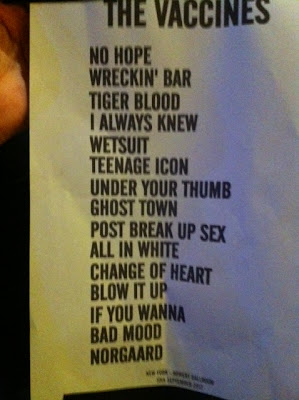 The Vaccines had a lot to celebrate on Monday night, their new album, The Vaccines Come of Age, went straight to number one in their home country of England. Yet, while the bands new album had just been released across the pond, they were strangely promoting it here in the US a month before it arrives on our shores. Nonetheless, the band took to New York City's Bowery Ballroom for the first of two sold-out gigs in the Big Apple, the second, which takes place on Tuesday at Music Hall of Williamsburg, will hear a spark in interest for the bands new music.

Bowery Ballroom holds a special significance for The Vaccines, it was the very first venue the band played in America and their biggest show at the time in 2011.  Now, back to NYC for the second time this year, they arrived on stage around 10:20. and straight away something was not right in the bands camp. Guitarist Freddie Cowan was experiencing technical difficulties with his guitar and singer Justin Young did his best to entertain the crowd, mind you all of this was happening before they even struck the chords to their first note of the first song of the night. Once the matter was resolved it was into the new single, "No Hope," which then had all of Bowery Ballroom clapping and head-bobbing away to the bands punk meets surf rock style of music. As the night progressed and fans would enjoy the bands uptempo sound, it was hard to not see Cowan and Young scream and swear at the sound techs and guitar techs off stage, clearly something was wrong with either the wiring or sound in their monitors, but the audience did not seem to mind. However, the band could not shake off what was happening, Young visibly upset would get patted on the back by bassist Arni Arnason, Young would eventually tell the audience, "Bowery Ballroom, this was the site of our first biggest show. A night we will never forget, neither will we forget this one." With a hyper charged mix of songs from both records, less than an hour on stage, the band retreated to the wings. No encore, no thank you, just typical punk fashion, left and called it a night. While, that stunt may have worked in April when they were in town, not on a proper tour, it was hard to justify now since they were trying to drum up buzz Stateside for the new record. But then again, what did we expect from The Vaccines?

Opening the gig was Ryan Jarman of The Cribs, who recently began doing solo gigs in New York Cit. In one of his first shows as a solo artist, and a last minute addition to the gig, Jarman had a full band on stage with him that seemed to feel more like a band practice than a gig. With his new experimental sound, Jarman is combining hardcore, punk, rock, ambient and blues all together, unfortunately it is so all over the place, for his sake he should fine tune it more before taking it to a crowd.
Posted by Salvatore Bono at 5:56 PM