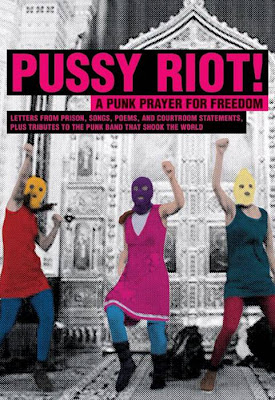 As we mentioned yesterday, Pussy Riot are set to release an ebook via Feminist Press this month. The collection has previously unavailable material including letters from prison, closing courtroom statements by the defense attorneys, and poems in addition to the infamous punk prayer and new translations of the powerful courtroom statements. Above, you can see the cover and pre-order it HERE.

In a great twist, Russian Prime Minister Dmitry Medvedev is calling for the release of the three incarcated members of Pussy Riot according to The Moscow Times. The Moscow Times reported:

Prime Minister Dmitry Medvedev on Wednesday called for the early release of jailed members of the Pussy Riot punk band. Speaking to United Russia activists in Penza, Medvedev said the jail time already served by the three band members was "a very, very serious punishment" and adding any more would be "counterproductive in this case," Interfax reported. A Moscow court on Aug. 17 sentenced band members Nadezhda Tolokonnikova, Maria Alyokhina and Yekaterina Samutsevich to two years in jail for their February "punk prayer" in Christ the Savior Cathedral in which they denounced Putin and Patriarch Kirill. The verdict against Pussy Riot will not go into force until the Moscow City Court rules on their appeal on Oct. 1. Medvedev also made it clear that he was not prepared to support the band. "I am sick over what they did, of their public appeal and the hysteria that surrounds them," he said. Medvedev's comments came less than a week after President Vladimir Putin condemned the band's performances as "witches' sabbaths.

Also joining the rally for Pussy Riot support are Refused. The band designed special shirts for their final reunion show in LA in November. Take a look at the shirt the band are making. 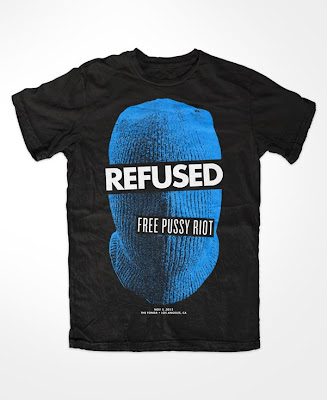