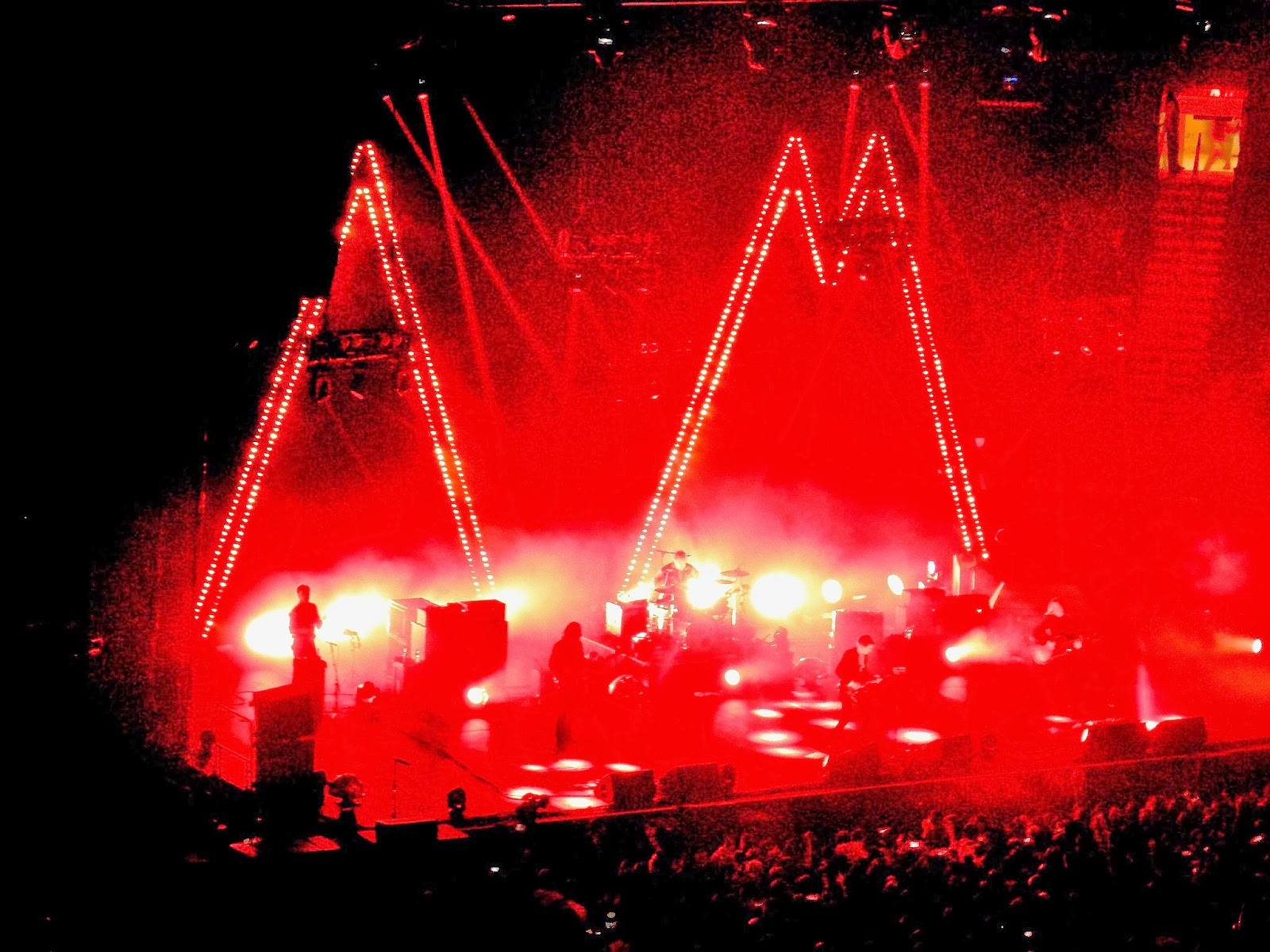 It was almost ironic that in the midst of a Polar Vortex and bitter cold in New York City that Arctic Monkeys would stage their very first headlining concert at The World's Most Famous Arena. After 12 years as a band, Sheffield, England's Arctic Monkeys have had the fastest selling-debut album in British music history with their 2006 classic, Whatever People Say I Am, That's What I Am Not, won the Mercury Prize in 2006, have had a variety of No. 1 singles on the British charts, and they headlined Glastonbury last year. They have been praised by critics the world over, yet, it all seems as if their biggest accolades come from their Mother Land. They have surprisingly never headlined any U.S. music festivals, never won a Grammy, just last month they finally topped the Billboard alternative chart for the first time ever with their single, "Do I Wanna Know?," and have played Madison Square Garden before -- only as openers to The Black Keys, two years ago. Now, months after the release of their fifth and fantastic album, AM, things seem to be picking up States side for the Monkeys as they celebrated with their largest North American headlining gig to date at the Garden.

Just after 9:15, as the houselights dimmed and a guitar echoed off stage, Arctic Monkeys confidently walked on stage to thunderous applause and deafening screams as they collected their instruments, took their final sips of water or alcohol, and hit the opening strumming chords of AM's opening track, "Do I Wanna Know?" It was then into "Brianstorm," and "Don't Sit Down 'Cause I've Moved Your Chair," that was a triple whammy to the crowd. Singer Alex Turner who looked like a cross between a young Johnny Cash and Danzig guitarist Doyle with his hair, addressed the crowd, "New York City! How are you? It is nice to be back and be here at Madison Square Garden," before they jumped into "Snap Out of It." With a giant lighting grid behind them that created the letters "A" and "M" to signify the album title they are touring behind and of course, the initials of the band, they were dropping a subtle retrospect of their career in their setlist with the the sprinkling of songs like "Crying Lightning," "Dancing Shoes," "Pretty Visitors," "Florissant Adolescent." In the AM-heavy setlist, they left out a majority of songs from 2011's flawless Suck It and See, and concert favorites like "The Sun Goes Down," "Mardy Bum," and "Teddy Picker," it shows that this band is evolving far beyond the songs that have gained them acclaim in their live concerts. With that being said, they still snuck in fan favorites like "I Bet You Look Good on the Dancefloor," and "Dancing Shoes," to reflect on where they came from and energize the crowd. Headlining Madison Square Garden is a big deal for anyone, whether you are Arctic Monkeys or Garden resident Billy Joel, so many artists make playing this arena extra special. Before closing their main set, Arctic Monkeys brought out fellow Brit Miles Kane to lend his guitar work to the closing number "505." Kane, who has a side-project with Turner called The Last Shadow Puppets have rarely appeared on stage together since their 2008 tour, showcased a special moment to longtime fans of the band. After 75-minutes on stage, they retreated to the wings with fans chanting for an encore.

After a few minutes, the band reemerged and ready to rock again. Turner spoke to the crowd, "It is almost 50 years to the day since Ed Sullivan brought The Beatles to America and had them play on his show." With the help of Kane, they played a very beautiful and reworked rendition of "All My Loving." Jumping into "One For The Road," and then closing with "R U Mine," a song that made it's live debut at MSG in March 2012 when they opened for The Black Keys, was a near poetic and perfect way to end the night. After all of these years rising in the United States, Arctic Monkeys have made it and a sold-out Madison Square Garden was proof of their deserving achievement.

Do I Wanna Know?
Brianstorm
Don't Sit Down 'Cause I've Moved Your Chair
Snap Out of It
Crying Lightning
Old Yellow Bricks
Fireside
Knee Socks
Why'd You Only Call Me When You're High?
Arabella
Dancing Shoes
Pretty Visitors
I Bet You Look Good on the Dancefloor
Cornerstone
I Wanna Be Yours
Fluorescent Adolescent
505

Encore:
All My Loving (Beatles cover)
One for the Road
R U Mine?
Posted by Salvatore Bono at 10:00 AM