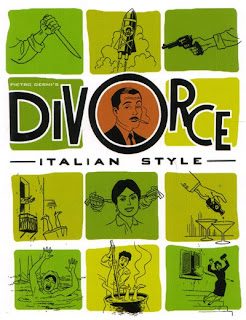 Hilarious, witty, sometimes gross and extremely fun. The 1961 Italian comedy, Divorce, Italian Style was a monster hit when it was released both foreign and domestic. The film, which centers in Sicily, is about a wealthy Baron played by the brilliant Marcello Mastroianni, who falls in love with his cousin and needs to break away from his current wife. Since divorce in Italy was forbidden at that time, Mastroianni's character devises a series of plans to kill off his current wife so he can be happy with his much younger cousin. The film a favorite among cinefiles and critics created a new era in comedy and has influenced many other films since its release. Director Petro Germi also cleverly cited another of Mastrioanni's films within Divorce, Italian Style, Germi makes Mastrioanni's character go to the movies with his cousin/girlfriend to see the controversial La Dolce Vita, which also starred Mastroianni. Divorce Italian Style was nominated for several Academy Awards in 1962 including Best Actor and Best Director, it even won the award for Best Original Screenplay. Divorce, Italian Style is a film that will have you laughing for hours and one to watch.
Posted by Salvatore Bono at 11:49 AM