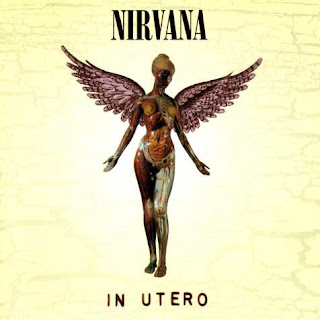 If you are Nirvana at the height of your career how do you top yourself after the groundbreaking Nevermind? If you are Kurt Cobain you look in more to your self loathing and new found fame and uncomfortable attention and deliever one of the finest records of 90's. Nirvana's 1993 effort In Utero, would prove to be the band's most controversial as well as their final record. Recorded in two weeks with legendary producer Steve Albiani behind the controls, Nirvana removed themselves from the polished and commercial Nevermind sound and headed toward a darker, dirtier record with In Utero. From the get go, the band's label, Geffen was uneasy about releasing the album, due to its lack of commercial appeal. In Utero was eventually released with a few minor changes to the mixes and became a five times platinum selling album, and debuted at number one on the Billboard charts. The success due to the help of songs such as "All Apologies," and "Heart Shaped Box." Controversy then loomed over the band and label with the song "Rape Me." The title was unacceptable for retailers like K-Mart and Walmart and the song had to be changed to "Wafe Me." Yet, with the bands high appeal and critical acclaim, the controversy only helped the selling of the album. With the popularity of the band even higher, tensions in the band rose and took a toll on the group. Less than a year after the album was released, Kurt Cobain, who famously battled drugs and addiction, would take his own life in his Seattle home. In Utero would go down as success and the swan song to one of the most beloved bands of the 20th century.
Posted by Salvatore Bono at 11:34 AM