Paying No Mind to Nevermind 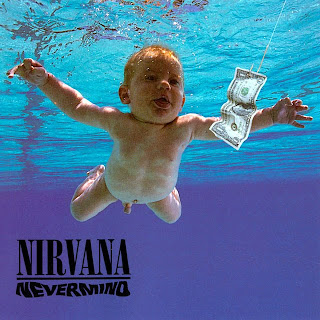 I'm Worst At What I Do Best -
By Bill Reese

Assuming we live in a universe without forgone conclusions, if I listened to Nirvana’s Nevermind for the first time today, I wouldn't like it.

Now, before the torches are lit and mobs are assembled, I should make a few points perfectly clear. Nevermind—more specifically “Smells Like Teen Spirit”—changed my life irrevocably. It is like B.C. and A.D. There is my life as a fan of music before “SLTS” and then there is life after it. As a nine year old boy, that was the first song that was undeniably “mine,” for my love for it was based not off the fact that my parents approved of it or played it on repeat, but because I connected with its wild, irrepressible energy—even if I had no idea what the song was really about, who Kurt Cobain was, or why that song had connected with the older cousins who introduced me to it.

“SLTS” was the last major pop song that unquestionably changed popular music, opening up the doors to a new wave of grunge, punk and alternative—but more importantly—it was the song that opened the door for me, to leave the world of music I knew from my parents stereo and discover the things that I liked, that I wanted to listen to, that connected with me, regardless of whether my parents hated or liked it.

But the crux of my thesis is not whether or not “SLTS” and likewise Nevermind opened that door—the more important issue is what I discovered once I walked inside. Inside that Pandora’s box was a burgeoning music scene emanating from Seattle and California. I started with Nirvana’s Nevermind first, sometime in the late spring of 1994, and In Utero later that summer. In the time between I hadn’t really heard about Kurt Cobain’s suicide, and was spared the emotional trauma of having one of my first heroes snuffed out by his addictions and depression.

It is fitting that I began my musical education with those records because they both represent diverse schools of thought on production and songwriting, and more importantly, they are the foundation on which my musical tastes lie.

I immediately fell in love with Nevermind, but falling in love the first time is easy, because you have no idea what it means, only that it feels so good. Nevermind’s was a success not just because Cobain and Novasellic had acquired Dave Grohl from Virginia and had composed an album of lovesick anthems. Their major success was finding DGC and producer Butch Vig. It was Vig who played the role of George Martin for Nirvana, because he captured their energy and found a way to streamline it into the left and right channels and sanded down the rough edges that jut out on Nirvana’s 1989 debut Bleach.

What Vig did to Nirvana with Nevermind has been his calling card throughout his career. He is the master of taking rough bands and polishing them into a shimmery shine. Look at his work on 2007’s New Wave by Florida hardcorers Against Me. New Wave is a perfect comparison to Nevermind, mostly because the backstory is the same. Small band from deep in the American nowhere with a dedicated, scene-insulated fanbase finds producer with a knack for popping up the unpoppable. New Wave is a pop-rocks and coke combination of visceral, political, powerful lyrics delivered in the cuddly, non-threatening packaging of rock bubblegum. Tightly compressed guitars, razor sharp hooks, handclaps and ba-ba-bada-ba harmonies. You sing along even though you don’t know what the song’s about.

Cobain—who despite his genius and God status—was an absolute hypocrite when it came to how he felt about stardom and fame. He wore shirts that read “Corporate Rock Still Sucks” … on the cover of Rolling Stone, the bathroom reading for the rock and roll establishment. They were the kind of punks who came into the country club and said, “We don’t need your fucking money!” but stayed long enough to have a couple beers, play a round of golf and fraternize with the caddy girls. I keep waiting to see one of those Direct TV commercials where Cobain is singing “Teen Spirit,” then looks off camera and says “You know what’s stupid and contagious? Switching to Cable…”

It was partially the dissatisfaction with Nevermind—not the fact that it was a brilliantly produced, brilliantly written, brilliantly marketed, brilliantly illustrated album… but because some of the old fans back in Aberdeen and Olympia didn’t like how corporate they had become—that drove Cobain to seek the tutelage of Steve Albini to produce their third studio album, In Utero. It was a complete 180, leaving the comfortable world of commercial rock and roll and getting into bed with a producer who stood for everything Nevermind was not. Switching from Vig to Albini was like switching from Michaelangeo to Jackson Pollock, both are geniuses in their own right, but their approaches are completely different.

After Geffen heard the first draft of In Utero they refused to release it, and rightfully so. The supposed “original mixes” that have leaked scare me now in 2009, and they probably made the executives at Geffen gasp when they heard the raw, disjointed, distorted mix blast out of their speakers. They probably called it “unlistenable,” and the disembodied voice of Albini most likely replied “No Shit.” Cobain stood his ground, but eventually caved. There was big money to be made. They let Scott Litt—who had just finished R.E.M.’s Automatic for the People—remix the singles “Heart Shaped Box,” “All Apologies” and “Pennyroyal Tea” (which was never officially released due to Cobain’s suicide.)

But Albini’s brush strokes, and his spirit, lived on in In Utero no matter how much gloss they put over the singles. In Utero is still my favorite album for the exact opposite reason that I loved Nevermind as a kid. It is a filthy, disgusting record that shrieks, moans, feeds back, is out of tune, and all of it is on purpose. In Utero was the most punk thing Nirvana ever did—and despite the fact that it had fewer hits, sold fewer albums, is second banana, if not third bananna to Nirvana’s other records—it is their masterpiece.

My taste in music leans more towards records that are raw—like In Utero—than overproduced epics like Nevermind. When Butch Vig overproduced Green Day’s slick epic-pop 21st Century Breakdown I cringed thinking that he’d once again polished a band down so much that he’d rounded off the corners that made them stick out.

Would I like Nevermind today? I don’t think I would. Not as much as I did when I was nine. Good pop music is always enjoyable, but just because I think Miley Cyrus’ “Party in the USA” is a gem of pop songwriting doesn’t mean listen to it. I would chastise Nirvana for abandoning their early grunge roots and cleaning up their act to sell more records. I’d say “Drain You” is a much better song than “SLTS.” Maybe they might put “Lithium” in an iPod commercial and I’d get sick of it, or put “In Bloom” in a Home Depot commercial and I’d get sick of it. Maybe they’d be on the cover of Rolling Stone wearing hipster jeans and hoodies. Maybe they would be a flavor of the month and forgotten by next spring.

But if I heard In Utero for the first time, having the same musical tastes I have now, but without ever knowing that record, I’d say to myself, “Oh my God, this is record I’ve been waiting for my whole life…”

Bill Reese is an editor with Playbill, but has written about music for Skope, Prefix, Good Times, and The Purchase Independent. Bill is also a contributing writer this site. He still has a poster of Cobain on the back of his bedroom door in Astoria, Queens, New York.
Posted by Salvatore Bono at 7:42 AM