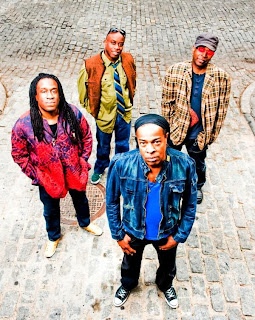 After six years, New York City funk rockers Living Colour are back! The band, who released their latest record, The Chair in the Doorway in September are experiencing a rebirth and return to form. Living Colour shot to fame in the late 80's bringing their funk, soul and hard rock elements to music. From out of the doors of CBGB's and into radio's around the world with the breakthrough song and video "Cult of Personality" the band would later become pioneers on the inaugural line up to Perry Farrel's Lollapalooza festival in 1991 and the alternative music movement in the early 90's. As Living Colour experiences much critical acclaim again with The Chair in the Doorway, a record that sees the band return to their roots and aggressive social nature, I had the chance to speak with bassist Doug Wimbish as we discussed the bands new album, beginnings and what the world outside is like in their eyes. Take a look at my interview with Doug below.

Off the bat I must say it is refreshing to have you back. In these turbulent times, we need a band like yours. How does it feel to be back with a new album?

Doug: Feels great. We worked on this together and I was able to use some of my resources to get this together. Its a great feeling when you do things right from the start as we did with this record.

What can fans expect from the new record?

Doug: LOVE AND HAPPINESS!!! Its a great record that connects the dots from past, present and future.

The last time you guys recorded was in 2003. What took so long to finally get everyone in the studio for a new album?

Doug: We had to all get on the same page to understand what this thing called LIVING COLOUR is all about. Scheduling was key as we all found other outlets to plug into. We needed to prioritize our schedules and get serious about this record and we did. I tip my hat to my band mates for allowing this to happen !!

The title of your latest record is called “The Chair in the Doorway.” What does this signify?

Doug: How can one get around self in order to move forward. Also, this record bought us together as a band.

The cover of “The Chair in the Doorway” is very interesting. It depicts a man sitting in a lounge chair staring at TV Color Bars. Are you alluding to the fact that we watch way to much TV?

Doug: No. Its just looks kool. It's not that deep to me but if you look at it long enough, it can start to play on the brain!!!!

Was there ever any apprehension about going back into the studio to work on new music and see how people would respond to it?

Doug: No not really. I organized all the studio recordings and i know how Vernon, Will and Corey work. I tried to keep everyone comfortable. And I figured out the right combination to unlock any negative vibes and turn them into positive results.

As one of the pioneers of the alternative movement of the 80’s. How do you feel about music today?

Doug: Its getting there. There are a lot of great bands out there. A lot have taken past elements and re styled them. I'm not sure about the shelf life of some bands but I respect any band for dealing with the wolfs of the music industry and there new found friend called EGO!!!!!

With your sound being so unique, who were some of your influences when starting out?

Doug: My Mom. She influenced me!!!! Jimi, Sly, P-Funk, Santana, The Stones, Jeff Beck, Bootsy, Miles and you.

When you were starting out, you had an outlet like CBGB’s to showcase your music and new sound. Now that CB’s is gone and everything on the Internet, do you think we need venue’s such as CBGB’s for bands to be noticed and a place where new sound’s can be discovered?

Doug: YES, it's very important to have a place for guitar hero contestants do do there thing and exercise human interaction !!!!!

As one of the first all African-American hard rock bands that helped pave the way for acts like Bad Brains, TV on the Radio and South Africa’s BLK JKS. What do you feel about the fruits of your labor?

Doug: It was BAD BRAINS that paved the way. The Bar-Kays and Funkadelic were very early DNA samples for us to draw. We are a part of this in our time frame.

Also, with so few all African-American rock acts, why do you think there is a lack of this in the genre?

Doug: Because no one whats to take time to learn how to play and instrument .

Social and Political issues have always been at the forefront of Living Colour, we saw and heard this in full force with your biggest single, “Cult of Personality.” Do you think that song’s meaning and power are still needed today?

Doug: Its like the moon, here to beam reality and turn the tides. The song is a history lesson with a groove!!

On the same topic, how would you describe the world we live in today?

Doug: When we put the pieces of this planet back together from all those who think they own it, we can have this conversation!!!!!!!!!!!!!


Special thanks to Doug and Kevin Calabro for the interview. The Chair in the Doorway is out now!
Posted by Salvatore Bono at 7:57 AM