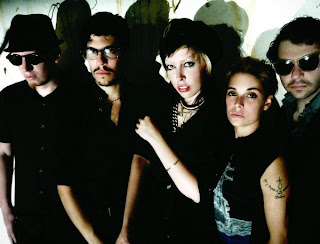 Dark, mysterious and down right dirty. That is after all what New York City is all about, but it is also a way to describe the members and sound of the cities latest breakthrough act, Living Days. Living Days hail from Brooklyn however have such a Lower East Side attitude from them that they relate more to the devious Bowery than any section across the river. The band combines 80's new wave, electro with a touch of goth and industrial. The members of the band have been gigging around for years playing with the likes of Lee "Scratch" Perry, Matisyahu and Cocoa Rosie. Yet, they all found their nitche and musical desires forming Living Days. I had the opportunity to speak with beat make Stephonik Youth just ahead of the release of their debut LP, Make Out Room, which will arrive next month. Take a look at my interview with Stephonik below..

The band has nice 80’s beats mixed over catchy ambient sounds,
what influences your songs and band when making music?

Everything influences us. The other day we played and watched a dog
walk by and i wrote lyrics by listening to what i wish he was saying
to the world really loud.

How did the idea to form a New Wave inspire you to come together as band?

New waves are new. New is cool. Who doesn't like new ?

The members of the band come from other acts – Matisyahu, Lee
“Scratch” Perry and CoCoa Rosie. Where did you all meet and find time
to make Living Days happen?

The universe matchmaker made us. We don't find time. It finds us.

Living Days considers yourselves to be “Love Terrorists,” what
exactly does this mean? Who came up with the tag line?

It came up with itself. We crash your party with the good vibes.

How would you describe your debut?

I wanted to make a record I would have liked when I was fourteen. I
got a little bit close.

My sex and my drugs and my rock and roll is all my brain and body needs ..

Being a band from New York and have such a grit to your sound,
has the city that never sleeps inspired you and your work?

Over the past few years we have seen a surge of neo-New Wave
acts emerge; The Killers, The Bravery, VHS or Beta, Scissor Sisters,
Editors and your band to name a few. Do you think this genre is on the
comeback trail? Or just a fun fad?

Fads are the genre on the comeback trail . I just want to keep rocking
in the free world.

Your concerts have been generating a ton of buzz. For those that
have never seen you before, what can you describe your live sets to be
like?

The ones of the past are erased. Nothing is set. I love you. Make me better.

Where does Living Days go from here?

Posted by Salvatore Bono at 8:02 AM