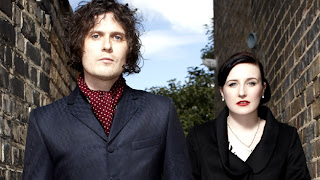 Side projects can sometimes be the downfall of an acts main band. For The Fratellis and their fans, when their main man Jon Fratelli decided to pursue a side/solo project along with fellow Glasgow native Lou Hickey, they formed Codeine Velvet Club. The band, which is a combination of The Fratellis garage sound mixed with cabaret and vaudeville style, Codeine Velvet Club are one of most catchy bands around. Fratelli, who like Johnny Rotten when he left the Sex Pistols and formed Public Image Ltd., dropped his stage name and adopted his birth name. Fratelli, who is now going by Jon Lawler seems to be very excited about this project and as I had a chance to speak with him, you will see why. Though The Fratellis maybe no more, Codeine Velvet Club are just as fun. Take a look at my interview with Lawler below.
How has it been working with the new band?

Playing guitar, drinking tea and talking nonsense with your friends is the way life should be...

How has the road and fans been treating you with the new material?

In the US we feel like the reaction from fans couldn't have been better, we hope we're giving fans the musical equivalent of Maker's Mark as opposed to the usual Wild Turkey.

For those that do not know, what is the major difference between Codeine Velvet Club and The Fratellis?

It's way more expensive to tour I guess..... Codeine Velvet Club is quite a stylized idea so the songs are of a different theme, we probably smell a little bit better after gigs, maybe....

How is your relationship with Lou? How did you two meet and decide to jam?

Lou and I met by accident, wrote some songs to fill the time in between waking and sleeping and started a band to escape the Glasgow drizzle...

The original name of the band was Codeine Breakfast Club, why the name change? In fact, what does the name actually signify?

Velvet suited us better I think, it really isn't meant to signify anything, I do have a friend who enjoys Codeine in the morning before he has his cornflakes.

NME Magazine has been giving you a ton of support since day one with your new project. How does it feel to have one of the most respected music magazines in your corner supporting your work?

I hadn't realised that we did, it's better than them disliking you I guess, I'm shallow enough to enjoy the odd compliment..

The Fratellis has a garage sound whereas Codeine has a bit of glam to it. Who were some of yours and Lou's influences when creating this music and band?

I really wouldn't describe The Fratellis as garage though I'm not sure how a band would sound playing in a garage but may give it a go, speaking for myself I wasn't influenced by anything that I haven't been influenced by before, my influences have always been general, The Beatles, Bob Dylan, Springsteen will always be there.

You have stated that your sophomore Codeine record is already in the works. When can we expect this? How different will it be from the debut?

I said we would do one if there was reason to do it, I say a lot of things, way too much, I had a lot of fun making this record though and love playing it live so it wouldn't be a chore to make some more.

Since you have arrived on the music scene, Scotland has had a spotlight on it with musical acts like Glasvegas, Franz Ferdinand and We Were Promised Jetpacks to name a few. Do you feel Scotland is the next musical mecca where fresh talent will come from and cause a global stir like Britpop did at the end of 90's?

I'm not sure that kind of thing is actually healthy for a city's music scene, the best music is usually made outwith a scene, ask The Fratellis and Glasvegas and they'll both tell you that they were desperate to exist outside the Glasgow scene, we played together to 10 or 11 people some nights but knew we were on the right road.

The Mighty Celtic Football Club!
Posted by Salvatore Bono at 8:48 AM