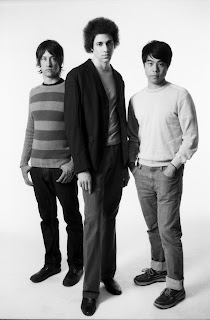 Minnesota this time of year is a very cold and brutal place, yet rock and roll fans from the area have been warming up and turning on the heat to Gasoline Silver. A trio from the Twin Cities, Gasoline Silver formed last year and the buzz about town was right there with them. Playing a garage rock meets 70's soul, Gasoline Silver sound like they come from LA rather than Minneapolis. Comprised of singer and guitarist Ron Franklin, Andy Hertel on drums and Josh Misner on keyboards, they take an approach to their sound that The Doors would admire. After releasing an EP, the band has finally released their self titled debut and we had the opportunity to speak to the band as they discuss their beginnings, recording and what is to come. Take a look at our interview with Gasoline Silver below.

The band started after Ron had a bunch of material he wanted to work on with a full band after doing a series of successful solo shows. What was it like having a full band?

RF: Playing these songs as Gasoline Silver was totally natural. Just as I imagined when I wrote the songs. But I didn’t expect to meet Josh and Andy so I never bothered to hope that it could ever be a band. I thought I’d find folks who could play drums and keys for some shows, and other folks for other shows.

As soon as I started playing with Josh and Andy, I knew I wanted it to be a set line-up. Because once we had this line-up, it was obvious to us and others in the room that we had something different than other bands. Maybe not better or worse, but a different set of rules to performing. Not about making it thru a song, or being consistent, but finding the song every time you play. And you can dance to it. Might as well see where it goes.

Was it odd working with someone who already knew the path they wanted the band to go in?

Josh Misner: It's good to have strong direction. At the same time, Ron keeps things spontaneous and open to evolution.

Andy Hertel: No, it wasn't odd at all. That’s a common situation. That said, our visions are similar, and we're excited about the future.

How did the band’s name come about?

RF: Originally, this was to be my next solo record. GASOLINE SILVER was the working title. By the time it became a band, the band just had to be called “Gasoline Silver”—that’s what the songs were supposed to be, and the songs led me to finding the other guys.

The “Silver” part remains a poorly kept secret, but it has been revealed that “Gasoline” comes from the book by Gregory Corso.

You have been around for a year and there is already a buzz behind you. How do you respond to this?

RF: It’s pretty far out. It’s cool to play a show and have people we don’t know requesting a song like “To Electricity” that’s not even released yet. Or “Honey Bee”, which we still haven’t recorded. Hope we can keep playing together, play in some more towns.

Josh: We kept it all very off the cuff and in the moment. Sessions done this way are always the most fun. The version of “It’s All Over But the Cryin’” that we cut live for the video is the same take that made it onto the record.

Andy: It was a blast. We really clicked in the studio.

How would you describe your sound to someone who has never heard you before?

Who were some of your influences in orchestrating the bands sound?

RF: As far as the sound… it just came down to how I felt like recording the songs, and the instrumentation I wanted to hear when performing the songs.

After touring solo, with just electric guitar and harmonica, I eventually got to the point where I could take any song I would do-- and find every corner of it that I could find as just one person. Which I dug. No loops or nothing. But once I got to this point, and had it down to some sort of technique, there was nowhere left to go.

I began to hear all these other sounds in my head while I was onstage-- drums, electro stuff. Thought I would start recording that way… and when Josh and Andy came along, that was it. I knew Gasoline Silver, the band, could try anything we wanted, and if it worked, it would have the sound that I wanted, because that happens to be the sound we make.

Hailing from Minnesota, what is the music scene like out there?

Andy: The Twin Cities music scene is vibrant and re-emerging. There are many great bands of many different genres who are pushing boundaries, and there is a lot of support for music in the community.

RF: Josh and Andy live here … and I dig being here. There are cool record stores with vinyl… we played our first show at 7th Street Entry… Willie’s is a very cool guitar store… we shot our videos live at the Flowers recording studio…. it’s pretty happening to have all that in the two towns.

Getting out of town, like going up to play in Duluth, there’s tons of great wide open space where you can really hone in on your thoughts, and what you hear in your head. In Cloquet, MN, there’s a little old corner gas station designed by Frank Lloyd Wright. Looked like Edward Hopper drawing for the Jetsons. I got a ten minute feedback solo out of seeing that.

RF: Different outfits, really. We want to go all the way to San Francisco. Last winter I played slide guitar and electric piano on this record Wig! by Peter Case… and during the sessions he told me how when he was starting out, playing on the streets in San Francisco, he would hang out at this place called the Coffee Gallery, and Bob Kaufman was a regular there. Kaufman was still doing his vow of silence, ten years after JFK passed. Then one day he just started talking. I want to go see this place, and play a Gasoline Silver concert in whatever the location is now. Probably a Panera.

If there was anyone alive or dead you could play with, who would it be and why?

RF: I’ve always wished Edith Piaf could play bass in Gasoline Silver. I’m adamant that no one else ever will. Just seems like she would be right in the pocket.

Posted by Salvatore Bono at 7:45 AM