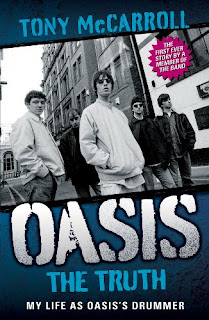 Since the surprise split of Oasis back in 2009 before a gig in France, the band has fractioned into two separate acts, one being Liam Gallagher taking every member of Oasis and forming Beady Eye, while big brother Noel will go solo. Yet, the ironic thing about the split is that the only two original members of Oasis were Liam and Noel themselves, every other original member has either left or been kicked out. None of the exits have been more noted than that of original drummer, Tony McCarroll. McCarroll, who was a member of The Rain with Liam and first Oasis lineup before Noel stepped in to take command, has documented all of his days in one of the world's greatest rock and roll bands in his autobiography - Oasis: The Truth. It reads like a journal entry of how the band formed and the days that Tony had spent on the road before he was kicked out by Noel in 1995 for allegedly punching Liam. In his book, Tony clairifies every situation and in fact states that he and Liam are cool and Liam is not the one you may think to be the massive jerk the media has made him out to be. Instead, according to Tony, it is Noel who is the one who is hard to work with. As this is the first book from any member of Oasis, it paints a picture the media and fans have never seen. I spoke with Tony as we discussed his days in the band, the book and the brothers. Take a look at our exclusive interview with Tony McCarroll, the original drummer and a founding member of Oasis.
What was the reason after 15 years, you decided to write this book?

Noel Gallagherisms!! I first decided to put pen to paper after the release of the final Oasis album, Dig Out Your Soul. Noel was promoting the album and was once again ridiculing my drumming etc. I simply thought that it was time to tell the truth. I guess it was just time to defend myself.

Have any former members of Oasis commented on the book? Do you know if Liam and Noel have read it or know about it?

I believe most of the original line up including Noel have read the book and thoroughly enjoyed it by all accounts. It’s good to see that Noel has taken it in the manner it was intended. Although it puts paid to the ‘I just turned up with a bagful of songs and demanded to be called chief’ story that Noel regularly peddles, I guess you can’t argue with the truth. Shamed many a devil.

You started drumming when you were five years old, did you realize at a young age that being a musician is what you want to do for the rest of your life?

I kind of had a natural desire to want to drum at a very young age and whether I was successful as a musician or not wasn’t important. I just loved the sound of the skins. When you were part of a band it was a fantastic feeling. I have enjoyed that privilege all my life and am truly grateful.

Are you drumming still today?

Drumming is something I will always do! There’s always a kit set up at home and an Ipod at hand. The fact I get the same enjoyment today as I have done for the last three decades is not something I take for granted. Also if a drummer stops’ drumming it all goes wrong. That’s what they say. Leads down a rocky road towards mental instability. Got to keep drumming. Ha ha.

Do you ever miss the limelight and world you had in Oasis?

No. I don’t believe in regret. I guess at first it was difficult to get out of the routine. I travelled a lot to compensate for the touring I guess. I was in the band for 5 years so it obviously was my whole life. Leaving when we had just celebrated our first No 1 hit was a bit gutting but I guess I also knew it was only a matter of time before Guigs and Bonehead would be off so the whole idea of being left behind was tempered somewhat.

Before Oasis, there was The Rain. The band that featured everyone but the Gallaghers. Did the mood and attitude of the band immediately change once Liam joined?

Most definitely! When Liam joined we all felt that it was a step nearer to where we wanted to be. Once Noel joined the jigsaw was complete.

What was your first impression of him?

Liam has an aura that fills any room. It’s infectious! He’s a real good laugh and always has been. That day was no exception. We used to say he was a walking wardrobe and no matter what he was wearing he always looked swanky. The perfect frontman.

After Liam joins, Noel comes in and takes control of the band. What was your first impression of him? It seems that you butted heads with Noel more, why is this?

I had known Noel for ten years before he joined the band. He was a good fella to be around. His humour was somewhat less cutting than it is now but he was still an entertaining chap. As the book explains I simply stood up for myself when Noel was pushing his luck. I guess after that it became a personal war for him.

Once Noel was in the band, was it a total dictatorship? Did you get any creative input?

The whole band took part in the creative input. Although Noel will tell different.

Did you notice a change in Liam & Noel’s personality once fame hit them?

Liam’s personality is only a slightly exaggerated version of himself. That’s one thing I admire about him. He’s real. Noel on the other hand decided to increase his chemical content and hop on a one way rip to Meglomania.

What I love about the book is that, once the tour’s begin, there is a literal day by day account of what happened and where. How did you remember everything so specifically?

I have diaries from all the tours I went on. Couple this with a researcher that could interrogate for the FBI and it all just comes pouring out. Jason Bourne I ain’t.

What was it like to go back and remember everything and put it to paper?

It took a long time for me to release the book because I guess I was worrying about exactly that. What I can say is that it became the most therapeutic exercise I’ve ever completed.

As the band was rising to become the biggest band in the world, you were asked to leave. Was this a shock to you?

Yes and No. I had been bitch arguing with Noel but I honestly was completely shocked when I received the phone call.

It was said that you punched Liam, but in the book you deny it. Why do you think the reason they wanted you out?

Was being Oasis good fun or was it just tiring work? Did you get to enjoy the fruits of your labor or was it just work, work, work – record, tour, repeat?
You’ll never hear me describe being in Oasis as work. It feels too good to be classified as work.

You were replaced by Alan White, what did you think of his style as opposed to yours? Do you feel that it was an unfair replacement? What about the other drummers that went revolving in the band through the years?

I think Alan is a fantastic drummer but as always if you add a new drummer it creates a new band. With absolute respect to him I’m confident that I would have recorded a comparable performance but Noel wanted me out. The way Zak approaches drumming often reminds me of his very so famous Father. It’s perfectly all over the place. Love it!

The book closes with Noel’s statement on leaving Oasis and his reasons, yet you find it to be a joke. Do you think there is more to the story of Liam and Noel that no one knows outside of the guys that were in that room that night?

What I found funny about that statement was it painted Noel as a victim. People had been ‘picking’ on him. I knew that was the most unlikely thing since sliced water. There is so much more to the story of Noel and Liam and I guess the book goes someway to explaining it.

Where were you when you heard Oasis split? Where you surprised?

I attend the V festival every year in the uk. This festival is spread over two sites. One in the North of England and one in the South. It so happened Oasis headlined on the Saturday night, a gig I attended. They were supposed to headline the site down south on Sunday but overnight things had fallen apart. One for the trivia book..I attended Oasis’ first and last ever gig.

Yeah. I think they’re great. Its good to see Liam with a smile in his eyes again. He sounds real good right now, like back in the old days.

What is your favorite Oasis song and why?

Too many and too many reasons to explain.

What is your favorite Oasis song AFTER you left the band and why?

Don’t look back in anger! Need I explain??

Posted by Salvatore Bono at 5:41 PM