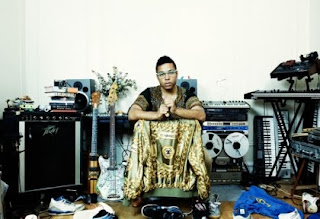 Snarky, edgy, cunning and clever are the best ways to describe Will Johnson aka Gordon Voidwell. The New York City beat maker and artist has been wowing audiences for a few years since he started making music while attending Princeton University. Undeniably, New York's best kept secret, until now, we featured Voidwell as one of our "15 Artists to Watch in 2011" and so far he has not disappointed. Voidwell is a mix of Prince meets New Edition meets Cameo and Chromeo. His music is an instant party starter and his live shows are something that will make even the worlds worst dancer (myself) tear up the dance floor. In an exclusive and very funny interview with the rising singer and entertainer, we discuss his sound, influence and dynamic sense of fashion. Take a look at our interview with Gordon Voidwell below:
Your birth name is Will Johnson, how did you become Gordon Voidwell? Why the moniker – is your Ziggy Stardust, Prince, The Edge, Bono?

Wow, I'd never thought of Gordon Voidwell as the Edge or Bono. Congratulations! For the first time I see the appeal of just going on as Will Johnson.
With such a unique sound and style, who are some of your influences?
Robert Moog, Dave Smith, Roger Linn, and Tom Oberheim. Highly influenced by all of them.

Mark Ronson, Okayplayer and so many others have been praising your style and sound. What is it like to get such high praise before you have even released a debut LP?

I think it's telling how unimportant an LP is in today's musical climate. You can actually be an artist with a following and a decent press trail and not even have an album out. Look at Nicki Minaj or Drake. Both of them were as big as they are before releasing a proper LP. In fairness to me, I released a free 26 song mixtape (all original material) and have played about a hundred shows in the last year. I work hard for the money.

Your music is a fun sonic trip for the listener and yet you do not seem to take yourself too serious, do you think that is a key to success?

Different things work for different people. I like to have fun. I think that's part of my music's intention. I think it'd be weird to make the music I make and then be stonefaced serious musician guy. Maybe if I was making guitar-laden Williamsburg indie rock with obtuse lyrics about nature and cocaine, but that's simply not me or my music.

Many of your songs are about race and culture, are you trying to get a message across to listeners or making someone aware of issues we still face today?

I have no real "message"...just trying to get people to dance with each other and talk about things. Other than that, the medium is, in fact, the message.

You hail from New York but the band is from Princeton University, do you consider yourself a “New York act” or a “Princeton Ivy League act?"

First and foremost, we should be thought of as the "talented tenth." That was the original band name. Gordon Voidwell and the Talented Tenth.

How much has New York inspired your work?
Medium.

You have collaborated with Das Racist, Brahms, Boy Crisis and Kassa Overall, what is it like working with them?
Aside from Kassa Overall, pretty terrible. They've all stolen my ideas to get to where they are today.

Your live shows are just a big ball of energy and you know how to work a room better than most well known acts, do you feel that in this day in age of music – lack of album sales, radio support, etc – playing your hearts out live is how to make a name for yourself?

I think a good live show is the most valuable asset an artist can have. I can remember James Murphy from LCD Soundsystem once saying in an interview - and I'm paraphrasing - "at a certain point it's gotta be about your band being able to kick another band's ass on stage." I feel really confident in my live show. I feel it kicks most bands' asses on stage. There was a while where I really liked opening up for bigger NYC bands that I didn't know, because it gave me a chance to make a lasting impression on the band/their audience. Every time I play a show I put my heart, soul, body, voice fully into it. I take that super seriously.

Some acts tend to take it easy when they make the big time. Will you still be performing each gig as if it is your last when you take the world by storm?

Absolutely! I'm ultimately still a black man so - statistically speaking - my life expectancy is quite low...every show could, in fact, be my last.

How is recording of your debut been? What can people expect that have never heard of you before?

Recording's been great. I was moving so well and then in the middle of being super productive and resourceful, my workhorse of a computer literally stopped working. So now, I'm raising money via Kickstarter to do a studio re-up. People can expect old synthesizers, old drum machines, harmonized vocal sections, chanting, hooks, hooks, hooks and more hooks.

Acid seems to play a key role in the banter of your live sets and some sound bites you have given to other reporters. What is your craziest story on the drug? Are you still using it?

I'm currently on it which makes it very difficult for me to speak critically about it. I'm afraid it might turn on me if I do.

Aside from a music maker and songwriter, you are also a fashion writer. Is style just as important to your whole persona as the music? With how design has evolved and continues to evolve so tremendously, is fashion the new rock and roll?