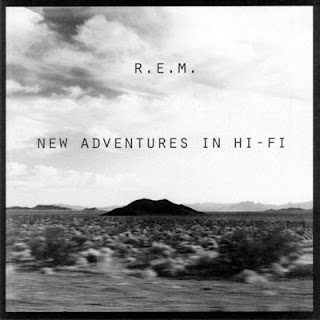 R.E.M.’s 10th studio album, New Adventures in Hi-Fi is not just an underrated classic, it’s a record that most people—even a few R.E.M. fans—don’t even remember. In many ways, it’s the album the band would rather forget. It was a record born during the band’s 1995 Monster tour—a tour that nearly killed their drummer, put their singer and bassist in the hospital, and wounded the psyche of the band so much that themes like fear, loss, death and loneliness would haunt the group’s next three albums.

Recorded during and after the tumultuous Monster Tour, New Adventures in Hi-Fi captures the sound of R.E.M. at one of the band’s most pivotal moments. By 1996 they had been playing together for the better part of two decades and singer Michael Stipe, guitarist Peter Buck, bass/multi-instrumentalist Mike Mills and drummer Bill Berry had never had better chemistry and tightness in their live shows. Inspired by the zeitgeist of the early 90’s alternative movement, Buck’s guitars were grittier, rawer, buzzing with distortion and ready to fill up the basketball arenas they played on tour. All of this was so significant because after that tour, the original four members would never tour again. The energetic, loud, modern rock sound that they had just perfected would have to be thrown out the window and re-invented from the ground up. New Adventures was the last true R.E.M. record, and for the 10 years that followed, it appeared to be their last good album.

More than half of the record’s 14 tracks were recorded live at shows, at soundchecks in empty arenas or while passing time in dressing rooms before gigs. On those tracks, Peter Buck is Boss Hog. His fast-paced, fiery riffs roar through songs like the roof-raising “Departure” and the raucous, thundering “The Wake-Up Bomb.” Whereas with Monster R.E.M. had sought to write arena-sized alternative anthems, the tracks from New Adventures realized the sound fully and completely. Their grunge foray was arguably a gimmicky attempt to grasp onto a young audience with a new sound, but on New Adventures, they played like the veteran rock band they were—one who’d been rocking before the terms “indie” and “alternative” had even been coined. On the rolling choruses of “Undertow,” Stipe and Mills harmonize over Buck’s thrashing guitar chords in one of the best Pete Townsend impressions ever recorded.

Not all of the live tracks were arena-shaking rockers. The record’s closer, “Electrolyte” was recorded at an amphitheater in Arizona and features Buck on banjo, Mills on piano and Berry playing what can only be described as a Latin American güiro stick. The song is an homage to old-school Hollywood, name dropping Steve McQueen, James Dean and Mulholland Drive.

They’d headed out on tour to promote Monster, but they were creating a new set of songs that were just as good, if not better. Many of the New Adventures tracks found regular places in the setlist, joining songs from R.E.M.’s already-extensive back catalogue. The tour was off to a good start, but it soon took a turn for the dramatic.

During a gig on March 1, 1995 in the city of Lausanne, Switzerland, Berry suddenly collapsed on stage. He was rushed to the hospital where he had emergency surgery for a brain aneurysm. Berry survived the aneurysm and recovered fully. He re-joined the band and finished out the remainder of R.E.M.’s Monster Tour, but it would be his last with the band. After Berry’s brush with death, Mills went under the knife to remove an intestinal adhesion. A month later, Stipe needed to get emergency hernia surgery. After each incident, the band recovered and resumed their marathon jaunt around the globe.

The remaining tracks on New Adventures were recorded at Bad Animals Studio in Seattle after the tour was over. Those tracks are dominated by the themes of fear, death, uncertainty and sadness. These sessions produced the record’s lead single, “E-Bow the Letter.” While “E-Bow” is one of the most gorgeous songs R.E.M. ever wrote—a stream-of-consciousness set of verses by Stipe and the hauntingly beautiful chorus vocals of punk Godmother Patti Smith—it’s also one of the band’s darkest songs. Its selection as the album’s lead single is a dubious choice at best, and the track failed to catch on as a radio single in an era when airplay was still very important. As a result, New Adventures was a commercial flop. In the 14 years since its release, it sits just shy of 1,000,000 total copies sold.

One of the oft-forgotten tracks from New Adventures is “Be Mine,” where Buck lays down a trebly, clicky hook while Stipe waxes romantically. As far as R.E.M. songs go, it’s one of the least complex and far from their most lyrically brilliant, but it’s a sweet, poignant gem hidden at the back of the record. Thom Yorke thinks so too. When asked by Stipe to sing a R.E.M. song with the band at the 1997 Tibetan Freedom Concert, Yorke inexplicably chose “Be Mine.”

The Monster tour nearly killed R.E.M… and not just the members of the band. R.E.M. spent the next 12 years trying to convince themselves that they were something that they were not. On the Berry-less Up, Reveal and Around the Sun—arguably the band’s worst record—R.E.M. filled the void on drums with melancholic synths, pianos and drum machines. It never worked. Michael Stipe loved what his friend Thom Yorke was doing, but R.E.M. was not Radiohead. This was supposed to be a rock band, a balls-to-the-wall rock band. It wasn’t until the group hired a new permanent drummer in 2007 that they began to re-discover their signature sound. 2008’s Accelerate was the first time the band had rocked since New Adventures in Hi-Fi. It was also the first time since that record that they had been truly relevant in the music scene. Their resurrection was heralded from all corners of the music press. Your glorious editor-in-chief named Accelerate the Best Album of 2008 on OffciallyAYuppie.com.

As good as Accelerate was, and as happy as many were to hear R.E.M. playing electric guitars again, the band sounded older, a little tired and worn out. New Adventures in Hi-Fi gives you all the swagger of the great live rock band mixed with the energy and tenacity of a group of musicians in their creative prime. This is one that cannot be overlooked any longer.


*Bill Reese occasionally pitches story ideas to OfficiallyAYuppie.com when he’s at his day job as an editor for theatre mainstay Playbill. In the past, he has written more pitches than stories for Prefix, Skope, Good Times and The Indy—though when he ran it, that paper was called The Purchase Independent. He spends way too much time listening to Hurrah! A Bolt of Light and waiting in line at El Rey del Taco in Astoria, Queens
Posted by Salvatore Bono at 11:52 AM