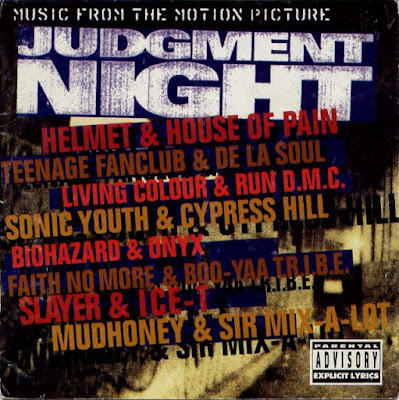 Before there was "rap rock" or bullshit "nu metal," there was the Judgement Night soundtrack. The music to the 1993 thriller had an interesting concept and one that was far ahead of its time -- take the most popular rock bands of the era and the most acclaimed hip-hop acts and have them do mash-ups together. This album created the cross-genre / mash-up hybrid.

Taking Pearl Jam and Cypress Hill, Helmet / House of Pain, Teenage Fanclub / De La Soul, Living Colour & Run DMC, Dinosaur Jr. with Del the Funky Homosapian, Sonic Youth with Cypress Hill, Slayer and Ice-T, it wasn't something that was done at the time. It was also something that was helping break down racial bariers within 90s sounds. It was mainly white kids from the suburbs getting their teenage angst out with garage rock and grunge and it was mainly black kids relating to what emcees had to say. While Ice-T had already dabbled in metal thanks to Body Count, this wasn't too much of a stretch for him, however, linking up with Slayer was a change.

While the songs may sound dated today, the soundtrack's importance and bravery needs to be applauded. This could have failed miserably both critically and commercially but was a success on all fronts.
Posted by Salvatore Bono at 5:37 PM