The day after his brother was crowned a "Godlike Genius" from NME, Noel Gallagher played his largest solo show to date in New York City as the former Oasis musician sold out Radio City Music Hall. 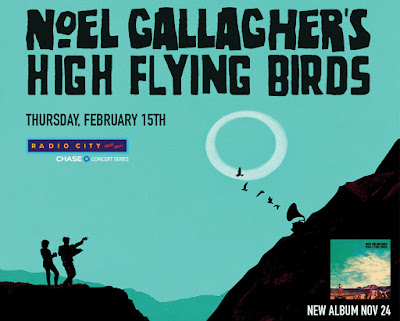 On Thursday night, Noel Gallagher's High Flying Birds brought their latest album, Who Built The Moon? to life at one of the city's most beloved and treasured venues and the veteran performer had a few tricks up his sleeve for this tour.


Listen To Our Essential Noel Gallagher Playlist on Spotify

Performing in front of a moon-shaped screen which projected various psychedelic images, the band, which also included former Oasis drummer Chris Sharrock and Gem Archer as well as his now-infamous French scissor player, took New York City on a journey through sound and graphics. Starkly lit for nearly the first hour of the set, it was almost as if the megalomaniac that is Noel Gallagher did not want you to pay attention to him on stage but rather hear the music the band was projecting and it fit perfectly with new songs like "Holy Mountain," "Keep On Reaching," and "It's a Beautiful World."

Eventually the lights began to shine on the star and his group which exposed a Manchester City flag over one of the speakers and as he ripped through his massive back catalogue, fans inside the amphitheater began to get on their feet.

Songs like "Ballad of Mighty I," "If I Had a Gun," and the Oasis covers of "Little By Little," "The Importance of Being Idle," and "Wonderwall," turned into a massive singalong like a City match where the fans chant "Blue Moon" after a victory. After 90 minutes on stage, he and the band retreated to the wings for a brief break and the encore was something that will be etched in memory.

After a brief break, Gallagher returned and played the somber but brilliant ballad "Dead in the Water," the closing track to his latest record. He then was joined by the rest of his ensemble as they delivered a one-two punch of tunes like the rarely performed Oasis single, "Go Let It Out," and the classic, "Don't Look Back in Anger."

Prior to the last song, he addressed the crowd how John Lennon was "one of ours and was one of yours," before going into The Beatles classic, "All You Need is Love," which felt rather poignant after the mass shooting in Florida the day before.

As Gallagher's presence as a solo artist continues to grow, it might be no surprise that he starts performing inside arenas on his next tour.