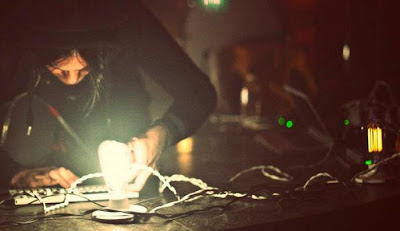 In 2005 Nine Inch Nails made a massive comeback with the album, With Teeth. While the album sparked a reinterest in the industrial pioneers career, as always their live shows were much talked about and highly praised in support of that album. Many say that the intricate and brutally intense sound live were contributed to then brand new Nine Inch Nails member, Alesandro Cortini. Cortini, an Italian musician, moved to L.A. to study guitar and has played in various bands such as The Mayfield Four, Modwheelmood, NIN, and also has done various remixes and work on his own for Ladytron, Jovanotti, Puscifer and Yoav. In 2008 he left NIN and then in 2010 started his solo work as SONOIO, which has lead him to international acclaim in the electronic music world. He also tours under the name, Blindoldfreak, which also doubles as his Twitter handle, when he is not doing work for SONOIO. In 2011, SONOIO hit the road for the first time and Cortini showed that sometimes less is more. He would walk on stage in a black hoodie and bend down in front of his synthesizers, computer, mixers and only be lit by a handful of naked lightbulbs that dressed the stage in front of him. While the rather private Cortini has not given many interviews for SONOIO or Blindoldfreak, we had the chance to speak with the musical titan about his work, backround and playing with Trent Reznor. Take a look at our interview with Cortini below:

Starting Sonoio in 2010, you finally took the act on the road in the fall of 2011, what was that experience like?

It's been really great so far: I didn't expect such a good response from the crowds. I suspect it has to do with both the unusual music presentation.

Playing in so many bands, how is it doing everything by yourself now?

Very liberating: mostly because it's much easier to coordinate and faster to get things done/set up. Everything fits in a carry-on sized suitcase, and it takes me 15 minutes to get ready to play, wherever I am.

With an impressive resume, many people still associate you with Nine Inch Nails, which you left before Trent took the band off the road. What was that experience like?

Definitely one of the best periods of my life, especially the Ghosts I-IV writing/recording sessions. I learnt a lot about myself and how to work with others, during my 4 years with the band.

Do you and Reznor still keep in touch? Could there be possible collaborations together in the future?

We do, and most likely yes, in one form or another.

Leaving NIN before Trent took them off the road, did you have any idea he would get tired of touring after all these years? What was your reason for leaving?

I left NIN because I got tired of touring, really. I have always been much more interested and happy in a studio environment, and with NIN we basically went non stop for 4 years. Especially after working on Ghosts I realized I needed to be in a studio to feel fulfilled, not on a stage.

The name of your act is Sonoio which is a play on the Italian phrase, Sono Io, which translates to “it’s me” does your heritage play a strong role in defining who you are?

I believe it does, in a way. I am not too attached to Italy to be honest. It's a love/hate relationship: I miss my family, friends, and certain aspects of living there, but truth to be told I also hate that place, there is no opportunity for music or anything else.

You initially released music for Sonoio for free; do you feel this was the best way to get your music out there?

No doubt. I fought it for a long time when Trent was giving Year Zero away for free, but eventually understood it's the way things are. The more free music you give away, the more people will find a way to support you, as long as you have physical product for sale.

You have released two albums; Sonoio Blue and Sonoio Red, is this part of a collection of works, based on the titles?

Yes...they're based on the colors of the Buchla 221 Kinesthetic Input Port....

You lent both albums out to be remixed by various people, when you hear the reinterpretations of your work does it amaze you what people can do these days?

It amazes me that people I respect and follow musically took the time to reinterpret my works. That's the most flattering thing....obviously I am very happy with the results too!

Are you a bigger fan of remixes or original source material?

Each has its own appeal, I believe.

The best and worst: learning to get by without sacrificing my love for music. It's hard to make a living only working on projects you like, but it's all I have been doing. I hardly ever take a gig for the money, as there is always something else I can do to pay the bills. This is the best and worst feeling at the same time, and I don't think I will ever get used to it.


Listen to SONOIO's Blue & Red below.