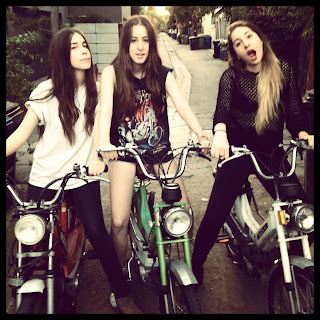 They have toured with Florence and the Machine, Mumford & Sons (even appeared in their latest video), and sing backing vocals on Portugal. The Man's forthcoming album, Evil Friends. They are one of the biggest buzz bands to come from L.A. in years and yet, the mainstream is still trying to take note as to how to pronounce their name. They are Haim from Los Angeles, California, three sisters who are taking American indie rock by storm thanks to their folk meets girl power rock and roll. In 2006, the sisters decided to make music together, but music would not come until six years after their formation when they released their debut EP, now after taking SXSW by storm last month, and all the buzz surrounding them, they are recording their debut in LA and will have it out before years end. While everyone else is talking about them, it is time for your attention to shift on what they have in store.
Posted by Salvatore Bono at 7:19 AM