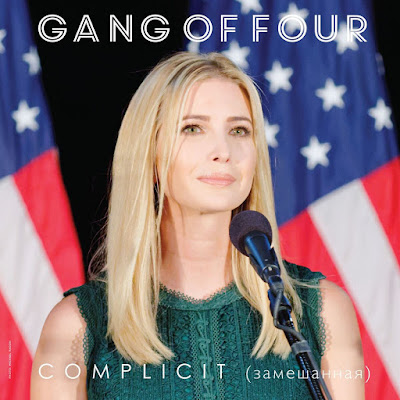 The EP features Ivanka Trump on the cover and no surprise, the collection is an anti-Trump array of tunes.

"When we think of ‘the media’, everyone has lots of ideas about what we mean. It could be social media, where hundreds of memes criss-cross the world; informing, misinforming, beginning or reinforcing ideas that may last a lifetime and beyond. Ideas about Jews, Muslims, or, say, the world trade centre or perhaps, the criminality of certain American politicians. And then there is the receding traditional media with disappearing jobs like ‘journalists’ and ‘fact checkers’. That’s the media the Trump family despise," guitarist and founder Andy Gill says of the song, "Ivanka" which is featured on the album.

Read Our 2011 Interview with Gang of Four

Posted by Salvatore Bono at 6:30 PM