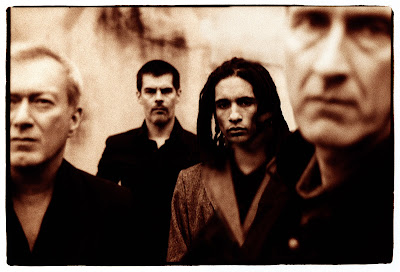 We could not think of a better way to celebrate our fifth anniversary than to feature one of the most important punk bands of all time - Gang of Four. For over 30 years, Gang of Four have been embraced and respected by everyone who has ever listened to good music. From the likes of Red Hot Chili Peppers to REM to Bloc Party, this band has influenced more than one could imagine. Forming in the late 70's in England, Gang of Four were the very first band to combine punk guitars and mix it with funk rhythms and pushed the boundaries of rock and roll from then until today. After numerous line-up changes and touring through the years, Gang of Four released their first album in 16 years, Content, earlier this year. In a rare interview, we had the honor of speaking with guitarist, Andy Gill about the band's history, the making of Content and the changing music industry that he has witnessed. Take a look!
How does it feel to be back?
We’ve been back for a few years now. Since the end of 2004. It’s good. I love to play live and I love to write and record.

It has been 16 years since you released a proper studio album, why the wait?

Typically I would put lots of ideas down in my studio, guitar stuff, drum patterns on the computer, then review them and pick out a couple that I feel might inspire Jon. Then Jon would come along and start singing and writing a few words. Then we talk about it, all aspects of it, where the words are going, not just what ‘the point’ of the words might be, but also how they work with the ‘idea of songwriting’, how they draw attention to that. Then I’ll edit it, and then we might play what we have with Thomas and mark; rehearse it, demo it. Then I’ll start recording it, trying to get a good drum take, bass take. I’ll do the guitar many times till I think I have a good approach.

I think sometimes it just boils down to the undeniable impulse to make things, when those things have a meaning, when they are cultural artifacts, that’s even better.

We have always been obsessed with groove, and to make all the elements work equally together, side by side.

We make music where every segment plays an equally important part, but has a relentlessness that takes you somewhere else. It s supposed to get under your skin and make your brain dance. It can , and does, become part of peoples DNA.

Its purpose is to resonate with people; sometimes to be a rallying cry, sometimes just to explain ourselves.

Does the title of the album signify anything? Are you content to be back?

When Jon and I talked about the album we were making, we looked back at some of the other records we had made and thought about how the visual context we created for the music was integral to each project. Bands usually hand over the artwork, the ‘packaging’, to other people but for us, it’s an intrinsic part of what we’re communicating. The record is called Content, in recognition of the way every creative form has been reduced to just that: content, the obligatory filling for the advertising sandwich. So we decided to make a box with contents, or rather a metal can.

When did the sessions for "Content" start? Was it after the 2005 tour?

No, later. I guess I started kicking around a few ideas in 2007, then Jon got into it, and it slowly gathered momentum. It took quite awhile.

In the 16 years since you released albums, the record industry has taken such a severe turn. How do you feel about this? Do you think they can save themselves?

The record industry’s a busted flush and boring to engage with. We wanted to do things on our own. Musicians have to think differently about their craft if they want to make a living or publish recorded music now that music has become effectively worthless due to illegal file sharing. The fans who do this are killing the bands and their support networks. Slowly, people are realizing that copyrights need to be respected in music, film, TV, writing if we are going to continue to have those creative areas at all.

You used Pledge Music to make "Content." How did you get involved with them and you approached fans to use this site and help finance the album. Who came up with the idea? Some bands have tried this and failed, but you seemed to make it work.
It’s been an interesting exercise and raised a useful amount of money, not a lot, to help fund the album. We didn’t want to waste our energies looking for a patron or a record company. We wanted to concentrate on the music.

So many bands last decade adopted the pulse pounding in your face sound that you were ambassadors of. Bands like Bloc Party, Franz Ferdinand, Liars, the list goes on. Even in the 90’s REM, Nirvana, Red Hot Chili Peppers cited you as major influences. Are you humbled and proud to be so influential to so many?

I’m not humbled. But yes, I’m proud. I had things on my mind in the late 70s and we had to invent a new language – interesting that, to an extent, that language has become the lingua franca.

You recently came back to the US to tour and have been playing all over Europe, how does it feel to be back on the road again and in front of your fans? How did the shows go?

Of all the albums you have made, which is your favorite and why?

Maybe “Solid Gold.” We just pushed by rhythm / groove thing a little bit further. And songs like what we all want and paralyzed are really stand out songs.

It has been said that it was a trip to New York City and a visit to CBGB’s that had a major influence on the band and reason to start. Will New York always hold a special place in the Gang of Four heart?

I think it was a very exciting time to go to NY, in 1976. We met a bunch of people in CBGB’s like Joey Ramone and John Cale, and it just seemed so straightforward - just get your band together and do something. But I’m really not sure we were that influenced by NY bands. I honestly don’t see it myself. I did like Television [ though they went on a bit ] and I did like Richard hell up to a point but I don’t see much of an influence. We took from the intensity and minimalism of Dr Feelgood, the space and hypnotic groove of Dub, the rhythm and drive of Motown, the narrative of the band and Dylan, the beautiful noise of velvet underground and the guitar-love of Jimi Hendrix. But it doesn’t ever sound like any of those.

With the tour being as successful as it has been, the reception to "Content" has been very positive; will there be more Gang of Four albums to look forward to in the future?

I think so yes.

Posted by Salvatore Bono at 6:25 PM