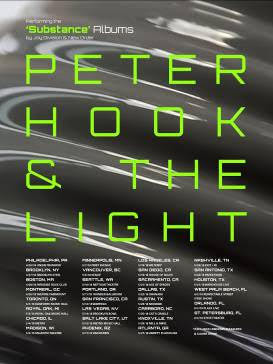 There are artists that wish they could find success in one outlet but the rare instance they find glory with two is enough to cement their place as iconic.


Read Our 2017 Interview with Peter Hook

For Peter Hook, the former bassist of Joy Division and New Order, acclaim, success, and hits is what anyone in any musical outlet today wish they could have. To prove this, Hook and his band, The Light returned to New York City for the first time in over a year-and-a-half to display the power of songs he created in his two previous bands with a packed gig at Brooklyn Steel.

The British musician has been touring the work of Joy Division and New Order yearly since 2010 in North America and in between, Hooky has released two acclaimed books about the live of both of the acts, and through that, he has connected with his audience on levels that have not been done before because now it is personal.


Read Our 2014 Interview with Peter Hook

The fans now know his side of the story and see how accessible the music pioneer has been this decade and now he is seeing the reward with his largest solo show ever in the Big Apple.

Over 2,000 fans packed into the Brooklyn warehouse Friday night to hear the Substance record, which is the hits of Joy Division and New Order, come to life. It is part dance party, party trip down memory lane, and part awe inspiring that an arsenal of this many quality of songs he was apart of writing. 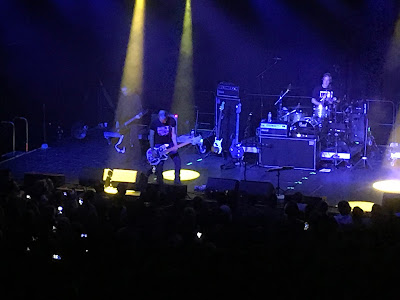 Opening the show with a 90-minute New Order set, everyone from all age ranges inside the venue were ready to shake off the worries of the work week and get ready to open their weekend. Dancing to tunes like "State of the Nation," "Age of Consent," "Bizarre Love Triangle," "True Faith," "Blue Monday," and "Temptation."


Read Our 2013 Interview with Hooky

Hardly addressing the crowd in between songs, Hook just let the music do the talking and kept the tempo up before a brief intermission.

After returning to stage, he realized they didn't do "Too Late," which addressed and then performend before kicking into his Joy Division set.

For the first time in 8 years, his son, Jack Bates, is not touring with the band due to fulfilling a duty as the new bassist for The Smashing Pumpkins, something Hook joked about.

"My son is not with us tonight because he has gone off to join the fucking Smashing Pumpkins," the Manchester man said. "How ungrateful kids can be these days?"


Read Our 2011 Interview with Peter Hook

His latest bassist, Hook says, had to learn 40 songs in a week, and has not skipped a beat.

Doing an hours worth of Joy Division material which included "Transmission," "Warsaw," "Shadowplay," "Isolation," "Dead Souls," "She's Lost Control," "Atmosphere," and the closer, "Love Will Tear Us Apart." Ending the night on the high in which he did, everyone inside the massive and overheated venue left with pleasure they had known and expected to have.
Posted by Salvatore Bono at 9:50 AM