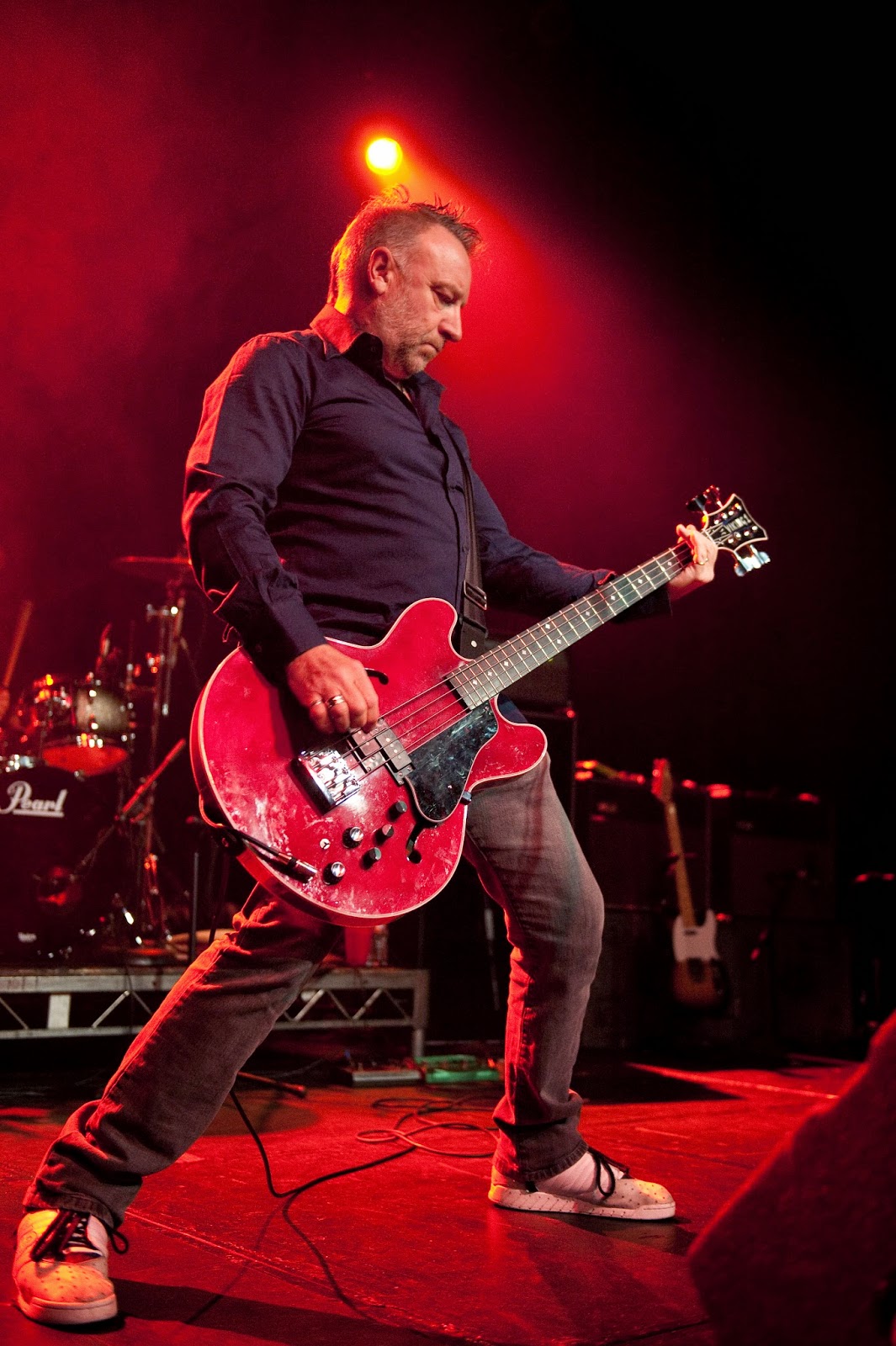 For the last five years, former Joy Division and New Order bassist Peter Hook as been touring with his band, The Light, the back catalog of his former bands. Hook, who has always been outspoken about his past work continues to celebrate it this fall as this week he will return to the U.S. to perform New Order's Low Life and Brotherhood. While his former New Order members work on a new record with a new person in his position, Hooky soldiers on to showcase what he can do on his own. Aside from performing with The Light, Hooky is also a celebrated author, writing his memoirs on Joy Division and his former club The Hacienda, currently he is penning his New Order memoirs. We spoke to Hooky about his current tour, his writing, what he thinks of his former bandmates and another love and passion of his (and ours) -- soccer. Take a look at our interview with Hooky below:

After successful runs doing Joy Division’s albums, plus New Order’s first two records, what does this experience of playing ‘Lowlife’ and ‘Brotherhood?’

Yes the time has come for New Order albums 3 and 4! The previous tours with Unknown Pleasures & Closer and Movement & Power, Corruption and Lies have all been very well received so I am very excited to be coming back again with Low-Life & Brotherhood. We played this set for the first time just a couple of weeks ago with 3 gigs in the UK, and we've just got back from playing it at a few shows in France & Germany - they all went really well! I can't believe we've done it! And those gigs have been great in terms of road-testing the new set and making sure it's as good as it can be in time for arriving in the US.

Playing these two albums now, what is it like to revisit them after all these years?

It feels absolutely fantastic. There are so many great songs that have been ignored for so long, simply because when I was part of New Order the others would just refuse to play them, I think they were just too lazy to change the set. Now, with the band that I have who are very enthusiastic and extremely capable musicians, we are able to do it and I must say it feels great. To be able to play Thieves Like Us, Subculture, Lonesome Tonight, Confusion, Way of Life... I have wanted to play them all again for so long. And I think the audiences do really appreciate it. We have something like 120 songs rehearsed and ready to play on tour! They will all get an airing.

How have audiences been responding to this tour compared to past tours?

Well we've only played it 7 times at this point, but each gig has been brilliant. We played 2 very big gigs in Manchester & London and I was blown away by the response, the crowds were absolutely fantastic. Then to take it on the road is very exciting - we had an absolutely wonderful sold out gig in Paris last week at the Moulin Rouge which is obviously a very famous venue. It's great to see the audience rocking out on tunes like Sunrise or Broken Promise, then dancing to songs like Sooner Than You Think or Paradise, then listening intently to the quieter ones like Elegia. This set really takes the audience on a journey and so far they all seem to be enjoying it!

Are Slaves of Venus also opening this tour like last year?

Yes! Last year the idea was for it to be a surprise, so we didn't announce it. The idea was to play a Joy Division set before launching into the 2 New Order albums. People were really happy about that, so we will do it again this year - no surprises this time, every Low-Life and Brotherhood gig will have us supporting ourselves, so get down early! A few people were gutted last time round that they missed it, that just shows you, you should always check out the support band!

Recently you made headlines reviewing Bernard Sumner’s autobiography, what is it like singing his lyrics?

It's quite difficult at times because some of the songs are very, very wordy... I wrote them all out to help me learn them and the amount of words in the songs is staggering at times! But I'm getting my head around it now. Bernard's lyrics are interesting because some of them are absolutely fantastic, like True Faith or Bizarre Love Triangle for example, but then some of them are a bit daft to say the least - Every Little Counts springs to mind! A lot of the lyrics from this period were actually written by all of us, not just Bernard, it was only later that he took it upon himself to do all of the lyrics.

When fans read your New Order autobiography and Sumner’s story, how many differences will they see?

I think they will see a lot of differences. There are many things in Barney's book that I obviously do not agree with, that's why I was very happy that Billboard allowed me to put my thoughts across. There are also a lot of simple factual inaccuracies in Barney's book so I will be making sure that mine is spot on in that department. I also couldn't believe that he does not even mention some of the albums - Power, Corruption & Lies, Brotherhood etc - they are just skipped over completely. I would like to think that mine will be more complete.

In his book, Sumner also claims to have hypnotized Ian Curtis, to your knowledge, did you know of this when it happened?

Yes I am aware of it. I found it quite a strange thing to include in the book, but yes I was aware at the time that that was something Ian and Bernard had been exploring.

How is your New Order autobiography coming along?

It's going very well. I am really happy that I decided to split everything into 3 separate books - Joy Division, the Hacienda and now New Order - because 1 book is simply not enough, I would have been missing out too much, a problem I think that Bernard's book has. I am cracking on with it, it will be called Power, Corruption & Lies: Inside New Order. Hopefully it won't be too long before it's out.

The world went from having New Order, then no New Order, now there are two bands playing New Order material. Do you ever think it is overload or just a great nostalgic trip?

I don't think it's overload, no. It must be great for the fans! It's quite funny really because you do have some fans that love both acts, some fans that go and see them and never us, and some that come to see us and never them! But in general I think it's a good thing because it keeps the music alive. What we are doing is very different to what "New Order" are doing though - in their performances they play the same 15 or so songs night after night, they haven't changed their setlist in about 15 years. On the other hand we are playing all the great New Order songs that they refuse to play, plus all the Joy Division tracks too. We play over 30 songs a night, a 3 hour show, and I'm proud to be able to put on our shows with what I consider to be a much fairer ticket price. I really like the idea of playing the albums, it's much more interesting and rewarding than just playing the greatest hits.

Now, with all of the Joy Division albums down and four New Order records toured, will Peter Hook and the Light ever release an album of original material?

Because of the trouble we're having as New Order, the legal problems that I'm still having with the others, it tends to sour everything and make you think it was all shit, then you play the stuff and realize 'Oh My God...!' Even though you hate each other now, you did create something absolutely magical. It's been nice to get that back by playing the albums, it keeps you going through something very difficult. I'm quite jealous of them lot, the others, because they're going on about doing a new LP and I'm thinking 'ah, that's what we (The Light) could be doing - we should be doing that!'. I've always had that thing, it was always drummed into me from when we started: keep on going, keep writing, your next song is your best song. So yes we are going to do it, we've started, we're fired up by the others, so thank you Bernard, Stephen and Gillian!

Will “Technique,” and “Republic” and beyond every get played live?

I want to play everything, yes. I'm not sure what the next move will be though at the moment. Let's tour the Low-Life and Brotherhood set and then we'll sit down and have a think about the next chapter. I would like to do Substance - Joy Division and New Order - that would make for a fantastic set. Then obviously Technique is looming large...

After this tour, what is next for you?

Well we're on the road now until mid December, which is great, the lads are very excited. After that I'll take some time off in January to finish the book, then in February we're back touring again, going back to Australia and New Zealand which I am delighted about, it has been far too long since we played there. And I'm still DJing now and again which I enjoy. And we'll be working on new material. So all of that, combined with being a husband and a father!

Switching gears, last time we spoke, David Moyes was managing your Manchester United. After the failed season last year, Val Gaal is now taking control. What are your thoughts so far? Also, pretty tasty to have Falcao and di Maria on the same team!

It was a shame how it worked out for Moyes but I think it was pretty clear to see that he was simply out of his depth - Man United is a different beast to any other team. Van Gaal seems to have a lot more about him - he's done it all, winning trophy after trophy and has a great track record it massive teams like Barcelona and Bayern Munich, so I think he will be great for United. I've been very impressed by the signings he has made, I can't believe Falcao and Di Maria play for us either! They haven't made the best of starts, but we are still in contention, so I think once it all clicks properly we should be looking at a good season ahead.

Just because he is always a fun topic, what are your thoughts on Mario Balotelli back in the Premiership?

It's a funny one isn't it. He's such a character, but to me he needs to cut out all of that and just focus on his football. There is obviously a great player in there somewhere but he hasn't quite done it as of yet in England. He didn't score enough goals for City and now at Liverpool he hasn't hit his stride. I suppose as a United fan I should be happy about that but you never like to see people struggling, hopefully he'll turn it around and fulfill his potential soon. All the stories do make me laugh, he is undoubtedly great entertainment.

Posted by Salvatore Bono at 7:47 AM