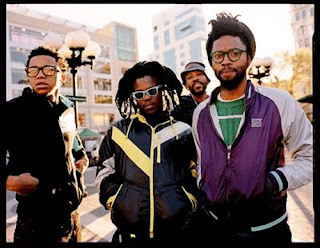 Growing up during the brutal and evil Apartheid era in South Africa, to seeing the fall of Apartheid and the election of Nelson Mandela, the members of South Africa's BLK JKS have witnessed more history in front of their eyes before the age of 20, than most see in a lifetime. From the townships outside Johannesburg to now playing gigs around the world, the art rockers in BLK JKS have much to say and much to make you feel. The eclectic band mixes tribal rhythms, hard rock, ambient, electro and jazz and fuse it together in their own unique fashion. In fact, they have stumped critics because they are so unique they do not sound like anyone and most are having a hard time comparing BLK JKS to any other band out there today. Their debut, After Robots was just released last month and has received acclaim from every major music publication from Rolling Stone, Spin, Village Voice, NME, and Q but the band is only speaking to me. In a ultra exclusive interview, I had the chance to talk with guitarist Mpumi Mcata as we discussed the bands roots, influences and coming of age in South Africa during one of the darkest times in history. Take a look at one of the more interesting interviews and figures I have chatted with below...


When I think of rock acts that come from South Africa, right away Seether is the only one that broke big internationally. Where does BLK JKS fall? How do you plan to break the mold of what we know of South African rock and roll?

MM: BLKJKS doesn't fall, anywhere.......and we don't really have a plan per say, as much as we have found ourselves as representatives of sort by default; we just do what we do and believe in it - that will speak for itself you know - and we trust that and trust that for a lot of people the music itself will scream South Africa in the best way and shine even more light on the art of this continent.

You grew up in Johannesburg listening to The Cure and other art rock bands, how did they influence you growing up?

MM: Well those sounds were muddled up in the bubblegum jazz reggae afro-pop/afro-traditional of all kinds, urban and otherwise from afro-beat to kwaito etc, never really given time to be by themselves in our heads I think and that was an awesome kind of blessing in disguise but one had to fine tune oneself to pick up on these signals freely because obviously there was pressure in this country during those days to not listen to the so called souless enemys music.

You grew up during Apartheid and then during the Mandela reign, how did the shift in political and social power change you not just as a person but also as a musician?

MM:Yes sir, the original Obama Effect ha ha ha ......... It's excellent when things like this happen in the world - duh - but you know there is another side to it; it's tough because some things happen on paper and people take a long time to catch up so it's been uphill for us as musicians which informed the sound and growing up. We must give credit to our folks for sheltering us as best they could because we saw some dark things.


Growing up did you ever think it was possible for four African musicians to make it in the music world and have your dreams realized?

MM: Indeed there were always great musicians kicking up dust down here - harare, brenda and the big dudes, stimela and sankomota were encouraging you know, hearing such massive modern African sounds one could definitely dream and of course there was always the likes of bra hugh masekela and fela kuti.

Did anything ever happen to you growing up under the Apartheid régime?

MM:Seeing somebody get killed in broad daylight is never - ok - but it was then and that’s the craziness of the time, but this is still happening around the world - do people never learn?

It has been said that there is nothing political about BLK JKS, how is that? Why is that?

MM:It's all political - but we are not at the stage where want to engage with it yet, our battle is by virtue of existing as an outfit, meaning you could either talk about change or be the change.

With South Africa hosting the World Cup next year and all eyes on your homeland, do you feel 2010 will be a break out year for you with more people around the globe wanting to know what is coming out of South Africa?

From Rolling Stone magazine to Diplo, your band has been praised, how do you respond to such high acclaim?

MM: With smiles, those people are our friends and we were drawn together by what’s closest to us - our art/craft.

What can people expect from your debut that have never herd of you before and are learning about you for the first time on this site?

MM: Sounds of the African Subconscious through the ages - and We are all African.

Your debut finds singer Lindani Buthelezi singing in Xhosa, Zulu and English, why did you decide to incorporate so many different tongues in your music?

MM: It's the way we talk to each other so if the music was to be honest it has to be representative - we're learning more languages with travel so soon maybe will over take one of our favourite bands the Brazilian Girls with multilingualism.

Your debut is called After Robots, what is that in reference to?

MM: A return to our true-selves and not being afraid to jump of a moving train/spaceship/taxi to get there - people in the taxi here in South Africa say it to get of at the traffic lights.

If there was one word to sum up BLK JKS what would it be?


Special thanks to Mpumi for the interview!
Posted by Salvatore Bono at 7:50 AM